Leaping lambs are an everyday site on farms but The Prince of Wales had to contend with a much older woolly jumper as he highlighted Australia's world leading wool trade. 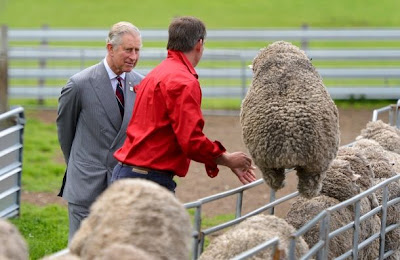 The Prince watched as a sheep almost jumped out of a pen in its desperation to follow the rest of the flock during a visit to a Tasmanian holding on 8th November.

The Prince had come to learn how the Thornbury family produced highly-prized merino wool, used to make luxury knitwear, jumpers and cloth for Italian suits, on their Leenavale Sheep Stud.

His Royal Highness was sporting a grey pin-stripe double-breasted suit by Anderson & Sheppard made from a rare quality of Australian Merino wool. The Prince did well to keep the mud off his expensive trousers when he was taken into a pen by Brent Thornbury who, with brother Jason, is the fourth generation of his family to run the sheep stud which covers 5,000 hectares and has around 12,000 merino sheep.

They watched as the sheep were moved along a narrow run into a pen before going into a shed where they would be sheared. One enthusiastic farm dog called Zig, an Australian kelpie, jumped up and ran on to the backs of the sheep, which then began leaping into the air.

Inside the shearing shed, The Prince and Mr Thornbury watched shearers expertly snip off fleeces in three minutes.

Lucy Byers, 35, was gathering up the wool and skilfully tossing it on to a table to be graded by other workers. The Prince tried his hand at throwing the fleece and sheepishly said afterwards: "I didn't do it to well".

His Royal Highness is Patron of the Campaign for Wool, a global community of sheep farmers, manufacturers and designers aimed at educating people about the benefits of wool in everyday use and fashion he launched in 2008 to help boost the wool trade which was experiencing a drop in demand and falling prices. On 9th September 2011 the RadicalRoyalist had written on His Royal Highness' efforts: Prince Charles helps to promote Aussie wool,

The Prince mentioned the jumping sheep when he met well-wishers later in the Tasmanian city of Hobart during a brief walkabout in torrential rain.

A six-month-old trainee guide dog called Indi caught his eye and he joked with her handler Melanie Rowe, saying: "How do you stop them cocking their legs?"

Ms Rowe replied: "We were more worried about her jumping up," and The Prince said: "It's bad enough with merino sheep." Brent Thornbury said after showing The Prince around his stud: "He was great, very laid-back and interested in what we were doing."

He described how The Prince has his own holding where he breeds rare sheep, saying: "He's got a fair patch of his own and was very interested in having a look at what we do and the wool in general." 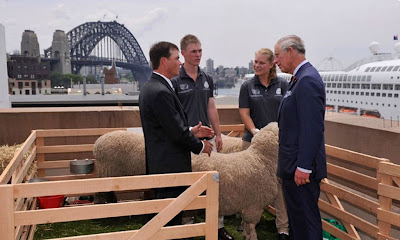 One day later The Prince also spent his day in Sydney highlighting the Australian wool industry at a Farm to Fashion event at the Museum of Contemporary Art. On the roof of the building which overlooked Sydney Harbour Bridge were fashion designers, retailers, students, wool growers and two merino sheep, prized for their fine wool, and a lamb.

The Prince again wore a suit made from Tasmanian merino wool and spent almost an hour chatting to people involved in various aspects of the textile industry. 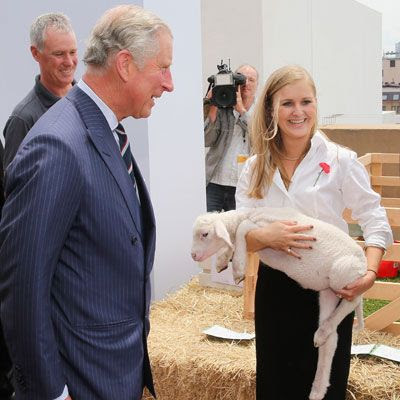 His Royal Highness launched his own initiative, The Prince's Campaign for Wool in 2010 to promote the benefits of wool as a natural and sustainable fabric and to help struggling sheep farmers.
Posted by radical royalist at 5:11 am