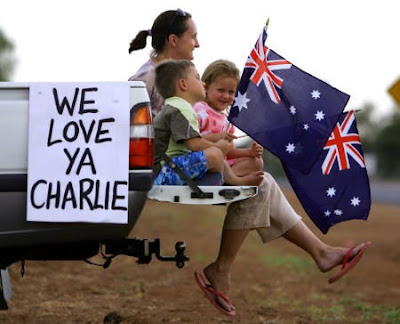 Prince Charles, Australia’s future King, will turn 60 on 14th November. The Australian media get ready for the birthday celebrations in a way they deem appropriate. And as always, “Melbourne personality and columnist Barry Everingham” acts as leader of the pack in hunting down the heir to the throne. Rupert Murdoch’s Sunday HeraldSun of 26th October 2008 contained the article Royal affair killed Kanga that was originally published on 11th October by Christopher Wilson in Britain’s The Daily Mail The lonely death of Charles’s other mistress. Strangely enough, the Sunday HeraldSun gives credit to a “Charles Wilson”. Obviously the Australian journalists were so obsessed with the name Charles, that they accidentally replaced Christopher with the Prince of Wales’ first name.

Except some minor editing the original article was copied, however the new headline had a malicious accusation. And there was another major change: The opinion of Barry Everingham … a Melbourne-based republican and a commentator on royalty, as he was previously introduced by the HeraldSun, was fiddled into what was a personal testimony of Christopher/Charles Wilson on the life of Lady Dale Tryon. She was born in 1947 to a wealthy Melburnian family and died aged only 50 in 1997. The article infers that Lady Tryon’s “beauty and Australian informality” won the Prince’s heart. “Did we know that her nickname Kanga came from HRH’s very own lips?”, Wilson asks. And the speculation goes on: “She had given herself to the Prince of Wales and he had loved her, for however brief a time.” All this is far from hard evidence for anything else, but that Dale and Prince Charles were good friends.

Refering to her tragic death, Wilson recalls all her illnesses: “There was a recurrence of her childhood spina bifida and, as she fought this off, she was diagnosed with uterine cancer.” In 1996 she checked herself into Farm Place, a fashionable rehab clinic to rid herself of her dependence on painkillers. "While undergoing treatment there, Kanga fell from a window, shattering her spine." She started fantasising that someone was trying to kill her. She and her husband divorced the same year. She travelled to India, contracted an illness, returned to the UK, went to hospital and developed septicaemia and died in November 1997.

A tragic life, certainly, and a sad end to former fashion icon, but what does Melbourne-based republican and a commentator on royalty Barry Everingham make of this story? The Sunday HeraldSun: “Everingham is certain Lady Tryon was very much in love with Prince Charles and believes their relationship had an effect on her declining health. ‘Her break-up with Prince Charles may not have been the cause for her demise, but it didn't help. She had a broken heart.’''

This is just short of accusing the Prince of Wales of being responsible for Lady Tryon’s premature death. A ridiculous assumption considering her long list of illnesses that go even back to her childhood.

“Politicians should leave history to the teachers”
It is a popular and frequent demand, what The Age writer Tony Taylor asked for: “Politicians should leave history to the teachers”: Yes, right, but who should give the teachers the guidelines? Journalists? Committees? Boards? Expert panels? Tony Taylor is involved in the National Curriculum Board's school history deliberations. Sounds like a very respectable enterprise, but who appoints the board members? Politicians!

It seems, you cannot escape politicians when school curriculums are drawn up.

In his article Tony Taylor lead an attack against Liberal frontbencher Tony Abbott who regretted “that there were not enough facts about English history in the current National Curriculum Board framing paper on school history”. Instead of a serious debate about history lessons – and Australian history lessons in particular – Taylor writes “the colonial cringe aspect of Abbott's remark was soon wittily countered by John Hirst's remark that Abbott remembered he was a (British) monarchist but forgot he was a (Roman) Catholic.”

I never considered Tony Abbott to be a British Monarchist. As a former Australian cabinet minister he is undoubtedly Australian and therefore he should be called an Australian Monarchist. And to be honest, I did not understand, why the description of him as a (Roman) Catholic was put in brackets. No one ever assumed Tony Abbott being a Maronite or a Chaldean Catholic, not even a Greek Catholic. Should this be a hint to the Act of Settlement? And should this be a particular problem for Tony Abbott?

Tony Taylor states: “It is generally the neoconservative side of partisan politics that, in a projectionist way, still sees history as a battleground for the hearts and minds of school students but which itself is keen to smear, interfere and impose.”

My guess is that every politician sees history as a battleground. And everyone at the helm in the education departments wants to impose his or her points of view on the poor school pupils. But from my own experience I can appease both sides. Pupils tend to adopt the opposite points of view of their teachers and their curriculum providers. The political backlash comes with every new generation of school leavers. The once universally praised values of 1968 and the years following are today held responsible for all what is considered wrong in Western societies. Australia might not have the ideological fight over what 1968 student revolts brought, but take a short look at Europe, where this year a kind of war of words broke out on the 40th anniversary of the student riots and the rise of terrorist groups in France, Germany, Italy and other countries.

Taylor denounces “the belief that there is an immutable, factually objective historical truth out there that needs to be captured, brought into the classroom and drummed into student heads. This naive and simplistic analysis is totally evidence-free.” I can only agree with him. There is no “objective historical truth”, never has been, never will be. The way we see history changes constantly.

That should be taught to school children.

A good example how history is a constantly floating meandering river is the famous question that was put forward to the Chinese Prime Minister Zhou Enlai, what he thought about the French Revolution.

Here are a few answers I found on the internet. You will notice that not only does the question vary, but also the time of the answer changes. And in the course of time other people were supposed to have given the answer.

This is Wikipedia's quote: Zhou Enlai is supposed to have said, when asked about the impact of the French Revolution: "It's too early to tell".

New World Encyclopedia: When China's Premier, Chou En Lai was asked in 1972 whether he thought the French Revolution had been a good or a bad thing. He mused for a few moments and then replied "It's too early to tell."

A Turkish website: Chou En-Lai, the late prime minister of communist China, was once asked what he thought about the French Revolution. He declined to comment, and explained, “It's too early to tell.”
That was in the early 1960s.

Good is this one from the Australian Government's Austrade site: As Chairman Mao said when asked what is the impact of the French revolution, he famously replied: “It is too early too tell.”

Dalton State College, USA: In 1989, at its 200th anniversary, a Chinese philosopher [Mao and Zhou were already dead by then, an anonymous author had to be found] was asked the importance of the French Revolution. He responded, "Too early to tell."

Crisis? What Crisis? French president inflates his annual budget by 11.4%
The world may face a recession and money might be short in all government budgets – except one: The Elysee Palace can swim in money. The French evening news France 2 revealed that Nicolas Sarkozy’s budget will grow by 11.4% next year.

Gallia Watch writes: "After giving himself a 206% salary increase in October 2007, and at the same time, tripling the budget of Elysée, the Sarkozy inflation continues. The news goes back to October 3, but hardly made waves. Les Echos revealed a new increase in the budget of the "hyper-presidency". When the budget had gone from 32.3 million euros to 100.8 million, the Palace, to justify itself, pointed to the "ensemble of operating costs and of personnel that was formerly covered by a dozen ministries, not directly by Elysée." For our part, we preferred the explanation that His Smug Highness required no fewer than 800 functionaries in his exclusive service! The indecency of this budget is blatantly evident when you realize that Sarkozy's predecessor, Bon-Appétit-Chirac, had already increased it by... 463% over that of Mitterand!

Queen Elizabeth II should ask Nicolas Sarkozy how he could increase his budget without causing a public outcry. After all, Buckingham Palace needs to be repaired, but the British government rejects the Queen’s plea to provide £3m for the most urgent repair works. While presidents can just grab whatever they want, Monarchs look like beggars when it comes to the necessary funds to run the state affairs.

Who said, a republic would come cheap?
Posted by radical royalist at 5:23 am 1 comment:

This Icelandic Royal Standard was established by Royal Resolution No. 23 of 5 July 1921, after Iceland became a separate kingdom in 1918.

Failed republic of Iceland
Iceland is bankrupt. Time to reconsider the hasty step to proclaim a republic. Iceland became independent from the Kingdom of Denmark in 1918, but remained a Monarchy and shared the same Monarch with Denmark: King Christian X, just as The United Kingdom and Australia share a Monarch – Queen Elizabeth II – or as Austria and Hungary has shared a Monarch since 1867. The Austrian Emperor Franz Joseph was also King Franz Joseph of Hungary.

During the US occupation Iceland was declared a republic on 17th June 1944. Today the Icelandic Krona's free fall on the international currency markets is surpassed only by the catastrophic failure of Zimbabwean currency. One of the country's three banks, Glitnir, has been nationalised; another wants money from its customers. Foreign currency is running out as international banks refuse pleas to lend money.

The Icelandic people will see a drop in their standard of living and the country will return to fishing rather than financial services. Iceland's near financial meltdown has been seen as the biggest yet faced by any country over its financial sovereignty in the 14-month-old credit crisis.

On 5th October the prime minister Geir Haarde made an emotional address to the nation. “There is a very real danger, fellow citizens, that the Icelandic economy, in the worst case, could be sucked with the banks into the whirlpool and the result could be national bankruptcy. No responsible government takes risks with the future of its people, even when the banking system itself is at stake. The Icelandic nation and its future takes precedence over all other interests.

"If there was ever a time when the Icelandic nation needed to stand together and show fortitude in the face of adversity, then this is the moment. I urge you all to guard that which is most important in the life of everyone of us, protect those values which will survive the storm now beginning. I urge families to discuss together and not to allow anxiety to get the upper hand even tough the outlook is grim for many. We need to explain to our children that the world is not on the edge of a precipice and we all need to find an inner courage to look to the future."

He should have revoked the 1944 proclamation of the republic and asked Queen Margrethe II of Denmark to become Queen of Iceland. British actor John Cleese had formulated a similar Notice of Revocation of Independence in his famous Letter to America (“To the citizens of the United States of America, in the light of your failure to elect a competent President of the USA and thus to govern yourselves, we hereby give notice of the revocation of your independence, effective today. …")
Posted by radical royalist at 4:48 am 1 comment: