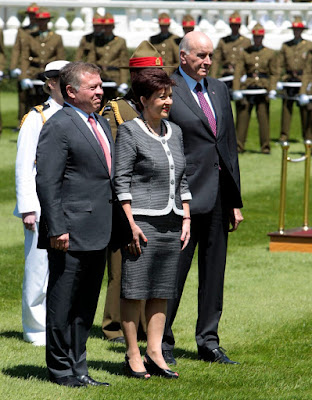 Posted by radical royalist at 2:21 am No comments:

Jordanian King and Queen to visit Australia and New Zealand


Their Majesties King Abdullah II and Queen Rania of The Hashemite Kingdom of Jordan are scheduled to pay a state visit to Australia on 23rd November upon an invitation from the country's Governor-General Sir Peter Cosgrove, according to a Royal Court statement.

In Canberra and Sydney, the Jordanian monarch is going to hold meetings with the Governor-General, Prime Minister Malcolm Turnbull, senior officials and parliamentary leaders.

On 28th November 28 the King is scheduled to conduct an official visit to New Zealand, during which he is going to hold talks with its Governor-General Dame Patsy Reddy, Prime Minister John Key and officials and parliamentary leaders.

The talks in Australia and New Zealand seek to boost cooperation between them and The Hashemite Kingdom in economic, investment and trade fields, in addition to discussing regional and international issues, the statement added.

Posted by radical royalist at 5:59 am 2 comments:

Monarchs in solidarity with New Zealand


Prince Philip and I were shocked to hear news of the severe earthquakes that struck on Monday. I send my condolences to the families of those who were killed and to the people whose homes and businesses have been affected.

Our thoughts are with you at this time.

"This morning I received a phone call from King Willem-Alexander of the Netherlands expressing concern and heartfelt condolences on behalf of himself and Queen Maxima to all New Zealanders who have been affected by the earthquakes centred in the Kaikoura and Hanmer Springs area.

"Their Majesties visited Government House last week for an Official Welcome and a State Dinner, before flying to Christchurch where they toured the areas under reconstruction from the 2010 and 2011 earthquakes. They also met earthquake survivors and heard about the physical and emotional impact the earthquakes have had on their lives. As a consequence of their recent trip and experiences, His Majesty said they both felt very connected to the suffering of those impacted by the recent quakes and asked that I forward to them their very best wishes and sympathy."

Posted by radical royalist at 10:24 am No comments:

The Australian Constitutional Monarchy is not so bad after all

The Australian Republican Movement has been strangely quiet during the US presidential election. Maybe it is thinking our system is not so bad after all. 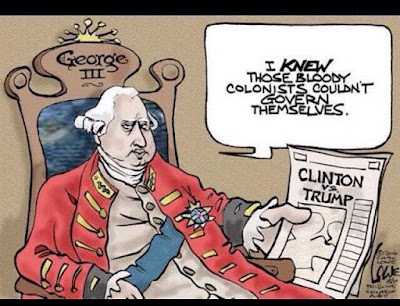 Posted by radical royalist at 3:37 am No comments:

Speech by His Majesty King Willem-Alexander in Canberra


Speech by His Majesty the King at a State Lunch on the occasion of the Dutch State Visit to Australia, Canberra, 2nd November 2016

Let me begin by thanking you and Lady Cosgrove for the warm welcome you have given us. It means a lot to my wife and me to be back in Australia. For us, personally, Australia holds many fond memories, not least of our extensive visit ten years ago.

Then, as now, we followed in the wake of the Dutch mariners who mapped out Australia's coastline four centuries ago:

Willem Janszoon, who set sail on the Duyfken in 1606.

And Dirk Hartog who sailed on the Eendracht in 1616.

Their explorations are traced on the great world map in the marble floor of Amsterdam's Royal Palace, which was built in the 17th century. The map shows only half of your great country, labelled 'Nova Hollandia'.

Every time I walk across that marble floor, I'm struck by the presumptuousness of giving the continent that name. As if it hadn't been inhabited for thousands of years by a civilisation that deserves respect as the planet's oldest living culture.

The fact is, Australia has always captured the Dutch imagination. For us it remains a land that 'abounds in nature's gifts of beauty rich and rare'. A beacon of freedom and independence. A permanent source of human enterprise and energy. In the Netherlands, just hearing the word 'Australia' brings a smile to our face.

Your Excellency, you have devoted your whole life to the freedom and prosperity of your country. As a soldier and Chief of the Defence Force, as the leader of the reconstruction programme in northern Queensland after the devastating cyclone of 2006, and for several years now as Governor-General. But you are also a symbol of the helping hand that Australia extends to the world. Not least in your role as Commander of the successful international peacekeeping mission in Timor Leste.

Today, at a time when the international legal order is under pressure, it is all the more important that we stand together to defend its principles. Australia and the Netherlands are natural allies as promoters of peace, justice and development, and we often work side by side. Take our partnership a few years ago in Uruzgan in Afghanistan. And our current efforts in the fight against terrorism in Syria and Iraq.

You have also given personal expression to the bond between our countries. You were in Eindhoven on that dark day in July 2014, when the first flights arrived carrying the remains of the victims of the downing of MH17. For my wife and me, commemorating the Australian victims this morning at the memorial was a very moving experience. We greatly appreciate Australia's outstanding cooperation in the investigation of the full facts, so that those responsible can be called to account, and justice can be done.

Australia has flourished over the decades, and it makes the Dutch proud to know that we played a part in its success. In the years after the Second World War, many Dutch families headed to these shores in search of better lives. For many thousands of Dutch people, Victoria Quay in Fremantle and Station Pier in Melbourne were gateways to a new homeland. And they proved that Dutch roots could thrive in Australian soil.

During this state visit, we will be celebrating the close bonds our countries have forged over the centuries. But perhaps even more important are the opportunities we see ahead of us. The Kingdom of the Netherlands attaches great value to our close partnership with Australia because we believe that, as like-minded nations, we stand stronger together. Together we can find better answers to the challenges of our time.

Just as, for us, Australia is a window onto the Asia-Pacific region, we want to be your window onto Europe.

As I said, Eendracht - Concord - was the name of the ship in which Dirk Hartog sailed to Australia in 1616. And today, 400 years later, 'concord' is a fitting flag for us to sail under as we go forward into the future.

Thank you for the warmth and friendship you always show us in Australia. 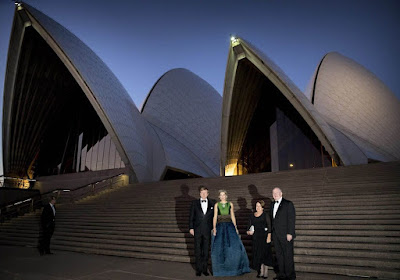 Posted by radical royalist at 8:45 pm No comments: