The Australian Chamber Orchestra ended its tour of Europe with a performance at St. James's Palace state apartments in London on Monday night, 12th December.

Prince Charles and the 150 invited guests were treated to performances of major works from artists including Tchaikovsky, Elgar and Sir Hubert Parry, the composer of Jerusalem. 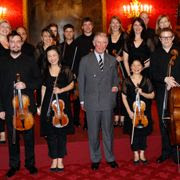 He said The Prince impressed the orchestra with his knowledge of surfing. "He talked about the music we played and about surfing," he said. "He is quite diverse. He seems to know a lot about everything."

The Prince told the audience that he had been curious to meet the orchestra. "When I read Kathy Lette's recent article I wasn't sure what to expect," he joked, referring to a piece about the orchestra by the Australian writer. But he said he was grateful to "enjoy such skill".
Posted by radical royalist at 9:20 pm No comments: