US for revival of active monarchy in Nepal?
Since Prime Minister Madhav Kumar Nepal resigned on 30th June under pressure from the Maoists, the Constituent Assembly, which has failed to draft a republican constitution and could not agree on anything but to depose King Gyanendra, has failed for the tenth time to elect a Prime Minister.

The Telegraph, Nepal, reported on moves to give the country the Monarchy back:

Can the world lone super-power, United States, afford another failed state in South Asia? Perhaps not!

With war torn Afghanistan already a failed state, Pakistan zeroing in the failed state status and, continued political instability already pushing Nepal to imminent economic collapse, should the US revise its Nepal policy?

The Nepali Patra Weekly, October 29, 2010, claims that the US has all of a sudden acquired an active posture in Nepali politics. The US is entirely convinced that the Nepali political actors and political parties were an incompetent lot and to expect positive results from them would be a self defeating exercise, writes the weekly referring to various sources in Kathmandu.

"The US is overly concerned over the increasing hobnobbing between leaders of the largest party in the Constituent Assembly, Unified Maoists and Communist China. The current state of Nepali politics is not appropriate for institutionalizing democracy in the country. And, the continuation of political deadlock could lead to the state capture by the Maoists with the support of the Chinese", the US has also comprehended. 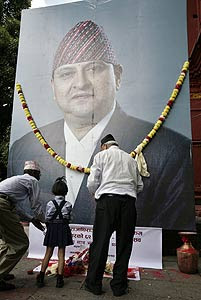 The US basically fears that Nepal could become ultimately another North Korea in Asia, the weekly reveals.

Sources have told the weekly newspaper that the US is in favor of "reviving monarchy in Nepal".

Interestingly, the report reveals that the US is not in favor of reinstating Gyanendra Shah as just as a Constitutional Monarch but it wants to see the former sovereign as an "active monarch". Sudden twist in Nepali politics? 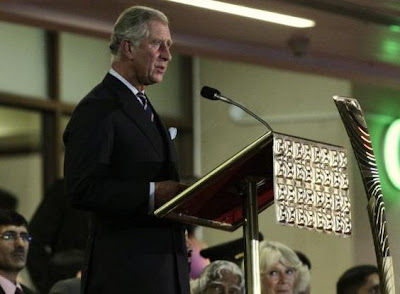 There was no mucking about: The Indian daily The Hindu put it in its headline: Prince Charles declares Games open. In a colourful ceremony the Indian capital Delhi the heir to the throne and to the title as Head of the Commonwealth received the Queen’s baton, which has traversed 190,000 kilometres through all 71 participating countries and territories. The Prince of Wales read out Her Majesty’s message and under the applause of some 60,000 spectators declared the Commonwealth Games open. 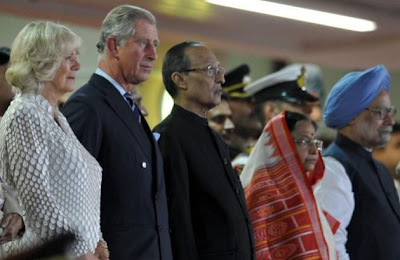 After Prince Charles, Ms. Pratabha Patil, or “Madame President”, as the Prince of Wales addressed her, read out her welcome message and added: “Let the Games begin.”

Considering the row ahead of the Commonwealth Games, this was a compromise everybody could live with. 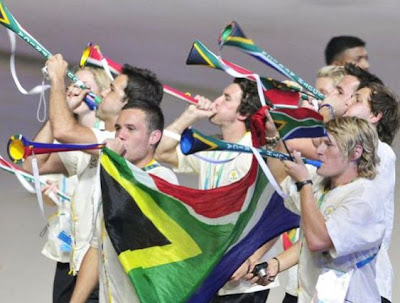 The South African team entered the arena with the meanwhile infamous vuvuzelas. A new national symbol of South Africa? 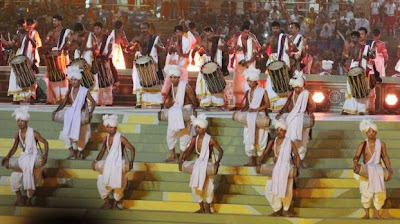 Drummers from various Indian states dominated the opening ceremony.
Posted by radical royalist at 6:01 am No comments: