The Queen of Australia received the Premier of Victoria in an audience at Balmoral Castle. On 5th October 2009 John Brumby informed Her Majesty on the Victorian bushfires in February 2009. He expressed his wishes, that Queen Elizabeth II may return to Australia in 2010.
Posted by radical royalist at 7:01 am 1 comment:

I was about to send the Chinese Communist embassy a letter of condolences, to regret the fact that 60 years ago a "people's republic" was proclaimed. A lamentable event indeed. But the real damage was done, when a republic was proclaimed on 1st January 1912. This “Republic of China”, which will celebrate its revolution on 10th October ("Double Tenth" of 1911) still exists, although its territory is nowadays restricted to the Island of Taiwan and some offshore islets.

For a Monarchist who has no love lost for this form of state, they are both undesirable. However, there are significant differences between the Republic of China and the people’s republic of China. While the once all-mighty Kuomintang on Taiwan gave up its iron grip on the population and paved the way to a multiparty democracy (it lost power in 2000 to an opposition party) Mainland China is still a one-party-dicatorship under an oligarchic Communist Party.

A Chinese Monarchist
When the Chinese Emperor was forced to abdicate far from every Chinese cheered the new republic. The great Chinese scholar Liang Qichao yearned for the return of the Emperor system after the abdication of Pu-Yi in 1912. Both this, and his urging for media freedom in China, "made him an unpopular figure both with Dr. Sat Yun Sen and the emerging Communist Party". Chris Devonshire-Ellis writes in his blog: "However, notable scholars of the day much admired him, including Lin Yutang, who called Liang 'the greatest personality in the history of Chinese journalism,' and Joseph Levenson who described him as 'a brilliant scholar, journalist, and political figure.'” 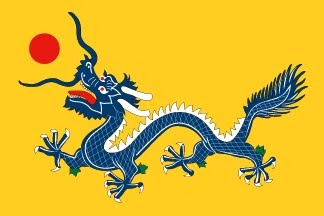 China's Imperial Flag was lowered in 1912

What about a Chinese Monarchy?
Daniel Bell, US professor of political theory at Tsinghua University in Beijing, gave an interesting look into his students’ thinking:

"One of my graduate students told me that she was dismayed by the uncritical coverage of the inauguration [of US president Obama], the kind of love-fest for a political leader that could only make the leadership of the Chinese Communist Party envious. We discussed, only half-jokingly, the possibility that China should adopt some form of constitutional monarchy, so that the public could project its emotions on a symbolic leader while evaluating the de facto political leader’s performance more rationally."

Who would be Emperor?
The Mad Monarchist from Texas found the right words describing the tragic end of Emperor Pu-Yi, who reigned as the Emperor Hsuan-tung and later as Emperor Kang The:

"Despite the best efforts of the communists the idea of the last Emperor as a villain never really took hold. Most today probably view him as a tragic figure but I take a more nostalgic view. It often seems that the world as a whole missed the significance of the fall of the Chinese Empire; an imperial system which lasted from the time of the ancient Greeks until the 20th Century. His life marked the end of an era and the start of a long period of suffering and terror for China. It also marked the end of China as a society based on the moral principles of Confucius.

"It is debated as to who would be the heir of the last Emperor today. In his book, Pu-Yi wrote that he designated his cousin, Prince Yu-Yan as his successor. He died in 1997 and if his line is accepted the heir to the Dragon Throne today would be his son Prince Hengzheng, aka Yuan Yuan."

Chinese Monarchists are starting to get organised. Here's a new website of the Imperial Qing Restoration Organization.

And the Mad Monarchist had his own thoughts on 1st October 60 Years of Red Chinese Tyranny.
Posted by radical royalist at 7:36 am 2 comments: