On 6th February Queen Elizabeth became the first Anglosaxon monarch to mark her Sapphire Anniversary, marking 65 years on the throne. Two very different messages were published by Her Australian and Canadian Governors-General.

The Governor General of Canada His Excellency the Right Honourable David Johnston, C.C., C.M.M., C.O.M., C.D., published the following message on the Occasion of the Sapphire Jubilee of The Queen’s Accession to the Throne:


On behalf of all Canadians, I am delighted to convey warm greetings to Her Majesty Queen Elizabeth II and to all the people of the Commonwealth on the historic occasion of the Sapphire Jubilee of her accession to the throne.
Throughout The Queen’s reign, she has inspired the world, demonstrating constant  dedication to duty and service to others. This impressive milestone, the first for any sovereign in our history, provides us with an opportunity to express our deepest gratitude for everything Her Majesty has done for the Canadian Crown.
I am honoured to add my voice to the chorus of heartfelt words of congratulations to Her Majesty The Queen from around the globe.

The Governor-General of Australia His Excellency General the Honourable Sir Peter Cosgrove AK MC (Retd) published this on Facebook (not on his website):


Today we acknowledge Her Majesty The Queen's Sapphire Jubilee - 65 years as our Sovereign - and we send Her the nation's best wishes.

Poor Australia, could only afford a simple sentence to mark the sovereign's milestone jubilee. Really a symbol for the shabby behaviour we all are watching in Canberra at the moment.

By the way, Her Majesty's Governor of Victoria does not mention at all the Sapphire Jubilee on the website, but on 6th February had this news item on her Twitter account.
Posted by radical royalist at 2:45 am No comments:


On 6th February Her Majesty Queen Elizabeth II, Queen of Australia, reaches another milestone: She can celebrate a Blue Sapphire Jubilee for her 65 years on the throne.

6th February is also the anniversary of the death of her father, King George VI, an event that made her monarch at age 25, therefore this will be one anniversary that won’t be marked publicly. The Queen will do some work behind the scenes as she reads documents sent to her by government departments in her historic red boxes. 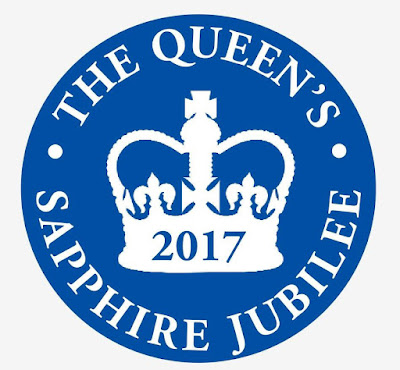 To mark the occasion, the Royal Mint has cast special coins. The milestone has seen coins struck in a range of metals and denominations from £5, £10 and £500 to £1,000. The recommended retail prices for the commemorative coins range from £13 for the brilliant un-circulated £5 piece to £49,995 for the £1,000 UK gold proof kilo coin - expensive but not to be the most valuable coin produced by the Royal Mint.

Although she is the first British monarch to reach 65 years on the throne, the feat is not unique elsewhere.