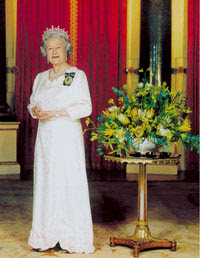 "Many people say the Queen is German, but as a percentage, how German actually is she?"

Strange questions are asked on the internet. The headline above was one of them. A simplistic answer could name all her ancestors and separate them into different nationalities. But this would be nonsense, because the Royal Families of Europe are all related to each other. None of them "belongs" to a particular nation, but all serve the nations they were put in with dedication and passion.

How many generation do you have to live in a country to be recognized as a "native"? Nationalism is a comparatively new concept that came with the French Revolution and has been poisoning international relations ever since.

Kings of the House of Hanover ascended the British throne in 1714, the last direct descendent of the Hanoverian Kings was Queen Victoria who married Prince Albert of Saxe-Coburg-Gotha. Nobody would deny that Queen Victoria was as British as you can get - an era was named after her. The British Empire was mainly created during her reign and reached its greatest extent under her grandson, King George V. Who would deny the services rendered to the British people by these Monarchs? And even the undoubtedly German Prince Albert wholeheartedly dedicated his life to his new country. He became the advocate of Britain's industrialisation, most notably through his dynamic support and work for the 1851 International Exposition, the benefits of which continue to be seen in the Victoria and Albert Museum and Royal Albert Hall.

The British Royal Family - and especially Her Majesty - are considered as the living symbols of "Britishness" abroad, strangely enough this is put in doubt by some British nationalists who call them "German". I never noticed that speaking in "Best Queen's English" meant speaking it with a German accent.

Should the nationalists' concept apply to everyone, no migrants or their descendents since the early 18th century would ever stand a chance to be called British, neither the Conservative politicians Michael Portillo and Michael Howard, who are second generation migrants, nor any migrant from the Indian subcontinent, the Caribbeans or Africa. And the only “true” Australians would be the Aboriginal people. All settlers who came after 1788 could never gain the status of “legitimate” citizens if the concept that the die-hard British nationalists try to impose on our Royal Family was applied to the vast majority of the Australians.

Monarchs have served their respective countries very well. The Russian Tsaritsa Catherine the Great was neither born in Russia nor was she a Romanov, yet she was a moderniser of the Russian Empire and her image has been experiencing a renaissance in recent years. That is equally true for "imported" Monarchs in Bulgaria, Romania, Greece or Norway, to name only the best known examples.

The same concept applies for the Queen of Australia, who also holds the office of Queen of the United Kingdom and Northern Ireland, Canada, New Zealand, Papua-New Guinea, and other countries. As a Monarch she is neither a citizen of the UK nor of any other of her realms. A Monarch not only is above party lines, but also above borders and frontiers. THAT is globalisation at its best. I want to see more of a world wide co-operation like this one that benefits the peoples of the Commonwealth.
Posted by radical royalist at 1:57 am No comments:

You can bet that the Melbourne broad sheet daily The Age never misses an opportunity to denigrate the monarchy. This time they mocked the fact, that 787,000 people watched the documentary "The Queen's Castle" on a commercial channel:

20/8/2007 - HE USED to be Australia's media watchdog, but Professor David Flint isn't much of a tastemaster. The national convener of Australians for Constitutional Monarchy emailed supporters urging them to tune into Channel Eddie's The Queen's Castle last week. But while 1.61 million tuned into Channel Seven's Border Security and Ten's Australian Idol drew a national audience of 1.44 million, just 787,000 Lizzie-lovers watched Nine. Even SBS topped that with Top Gear. And more good news for whoever runs the network, with a Flint suggestion to broadcast Trooping the Colour. "After all," he writes, "German audiences had more than one opportunity to see this, and they live in a republic." Flint pointed out that royal programs rate "very well" and "are probably not expensive to acquire" before giving the Sydney station's phone number. You can watch the The Queen's Castle tonight. Or … not.
http://www.theage.com.au/news/national/vincent-van-somebody/2007/08/19/1187462085298.html

I take from you today's comment that you have doubts about David Flint's remarks about the huge success broadcasting "Trooping the Colour" has in Germany.

Since 1977 ARD, the German equivalent of the ABC, has been broadcasting live the parade in honour of Her Majesty with great success . Do you think they'd do that if nobody was interested? It is even repeated twice, once just before midnight and the following day on Phönix, der Ereigniskanal (The Event Channel).

If you know German, have a look yourself:

What a great pity we Australians have less opportunity to watch the Queen of Australia on TV than the citizens of the German republic.

But back to The Queen's Castle...only 787,000 viewers.....not bad for a repeat and for a programme available at most good DVD shops!

One wonders if you have ever watched either programme. The Queen's Castle is actually a very interesting documentary about how the royal house is run on a day to day basis. Pity then that the Australian edition is revoiced and cut down from the BBC original!
Posted by radical royalist at 12:46 pm 1 comment: