The Prince of Wales and Duchess of Cornwall will tour New Zealand and Australia from 4th-15th November; visiting 12 cities and towns; seven regions of New Zealand and three Australian states and one territory in 12 days. Their Royal Highnesses will arrive into Wellington at the start of the tour and will travel to Dunedin, Nelson, Ngaruawahia, New Plymouth and Auckland in New Zealand. The Prince of Wales will also visit Westport. In Australia, The Prince and Duchess will tour Adelaide and Tanunda, Canberra, Sydney, Albany and Perth. 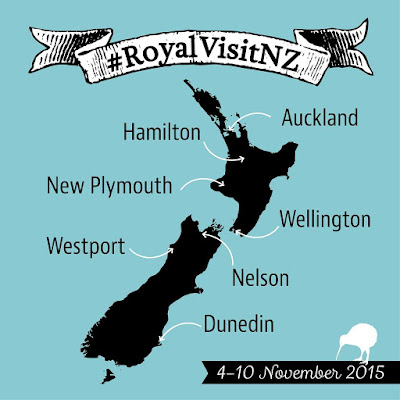 In New Zealand, highlights of The Prince of Wales and Duchess of Cornwall's Tour will include arriving by train into historic Dunedin station, sampling the best of the country's spectacular food and wine during a visit to picturesque Nelson and being welcomed to Tūrangawaewae Marae, the home of the Kīngitanga (Māori King Movement), where Their Royal Highnesses will view a waka (canoe) armada on the Waikato River.

In Australia, the Royal couple will mark the centenary of Gallipoli by visiting the new National Anzac Centre in Albany and viewing the point from which the troop convoys departed; get a taste of regional life in the South Australian town of Tanunda and celebrate His Royal Highness's birthday with Western Australian families at a beachside barbeque in Cottesloe.

Many of the Tour's engagements reflect the themes of community, culture and conservation. For instance, The Prince and Duchess will have the opportunity to meet people in urban and rural areas across both countries and to learn how communities support one another. In Auckland, The Prince will visit Nga Rangatahi Toa ("Strong Youth") to hear how the organisation provides intensive creative arts mentoring through established artists, actors, musicians and creatives, to support young people back into work, education or training. Her Royal Highness will see a shining example of community cohesion at Oz Harvest in Sydney, a charity which collects surplus food, and redistributes it to charities which support the vulnerable.

The programme also reflects The Prince and Duchess's strong relationship with the military in both New Zealand and Australia. In Wellington, New Zealand, they will lay a wreath at the National War Memorial, and His Royal Highness will take part in a military exercise in Westport. Their Royal Highnesses will spend Remembrance Day in Canberra in Australia, and will attend the National Ceremony at the Australian War Memorial.

Her Royal Highness, who is Colonel-in-Chief of The Royal Australian Corps of Military Police, will visit Victoria Barracks in Sydney, to mark their 100th anniversary.

This is The Prince of Wales's 9th visit to New Zealand, and his 15th to Australia. It is The Duchess of Cornwall's second visit to both countries. The couple last visited New Zealand and Australia in 2012, as part of The Queen's Diamond Jubilee Tour.
Posted by radical royalist at 9:51 pm No comments: