In Ireland the Queen wore her favourite Australian jewellery

"Later, she reverted to a buttercream, V-necked, double-breasted coat featuring a four-button detail at the waist and ruffle detail on cuff and pockets. She wore a patterned dress and a matching hat. After relying on black accessories earlier, the queen switched to cream for her handbag, gloves and shoes.

Few could take their eyes off her sparkling diamond brooch, known as the Australian wattle brooch, a gift from a Commonwealth tour 56 years ago.

It is a personal favourite when the queen wears this uplifting colour; and the yellow diamonds, representing the Australian wattle flower, are backed by blue-white diamonds in the form of mimosa leaves.

The brooch also incorporates diamonds in the form of the blossom of the tea tree with, at the centre, a large white diamond. It was designed by Paul Schneller from Budapest, Hungary, and was a gift from the government and people of Australia."
Posted by radical royalist at 12:57 pm 3 comments:

According to The Age more than 7 million Australians tuned in across the free-to-air networks, the bulk watching Seven (29.8 per cent) and Nine (22.7 per cent). The RadicalRoyalist could not get hold of the pay TV figures, but they must show a considerable number of viewers since many would have preferred the BBC or UK-TV's comments to the remarks of, let's say, Channel Nine's republican expat Kathy Lette. 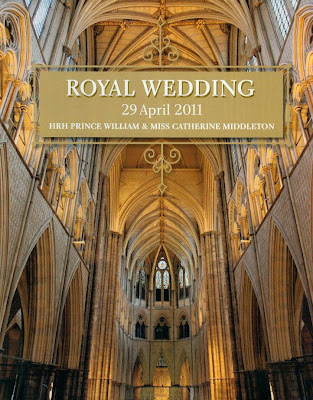 Australia Post was commemorating the Royal Wedding of Prince William and Catherine Middleton with the release of the official stamps issued on 12th April. 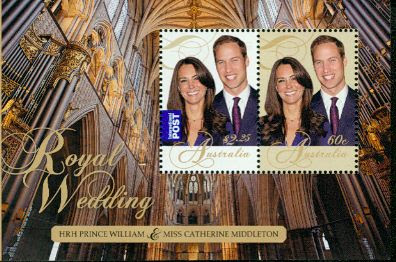 "Australia Post is delighted to commemorate the Royal Wedding of Prince William and Catherine Middleton, with a set of stamps that captures the happy couple on their wedding day," said Australia Post Managing Director and CEO, Ahmed Fahour.

"The official stamp issue has been very popular, with a number of post offices making additional orders to keep up with the strong demand. We are encouraging stamp collectors and royal fans to put their orders in early to avoid disappointment. Australia Post has a proud history of commemorating significant events with instant stamp issues."

The stamps with a motif of the actual wedding could be released within days of the wedding due to special technology that allows the images to be uploaded into a Royal Wedding stamp template, pre-approved by Buckingham Palace. 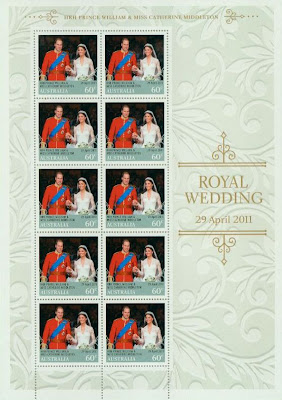 The stamps and associated products are available from participating Australia Post retail outlets, via mail order on 1800 331 794 and online at auspost.com.au/stamps while stocks last.
Posted by radical royalist at 3:53 am 1 comment:

Any website with more than 10 Million hits can only be called a success. In the year to 12th May Australians for Constitutional Monarchy’s website achieved 10,061.101 hits.

Though it is not the only Australian Monarchist website, it is certainly the most popular and the most influential.

Republican Australians hate it with fury: “David Flint clutches at every royal straw he can find”, remarked his most passionate enemy Barry Everingham.

And David Donovan, media director of the Australian Republican Movement, complained: "The problem republicans face is that monarchists like David Flint are happy to exaggerate, distort and sometimes even deceive to argue their case. Their strategy is to try to create a myth that will plant a seed of doubt in the minds of the uninformed."

David Flint, the national convenor of Australians for Constitutional Monarchy, is above all a very active writer and publisher. His opinion pieces appear daily and more often than not, he writes two or three comments. Considering that about one quarter of ACM website's visitors come from overseas explains other monarchies (i.e. Thailand) or Monarchs in exile, King Constantine II of the Hellenes.

While the Murdoch and Fairfax media empires still advocate a republican ideology and have to come to terms with falling influence, the Monarchist websites grow more popular by the day. Recent opinion polls indicated a drop in republican sympathies. This is certainly not due to an unbiased reporting in the mass media, but only because the internet offers Monarchists to publish their arguments.

Well done, David. Keep on the fight!
Posted by radical royalist at 1:39 pm No comments: 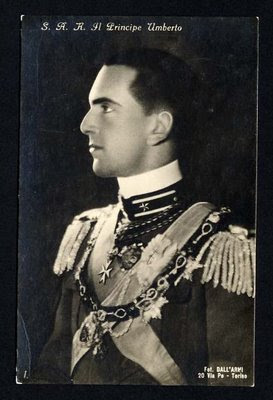 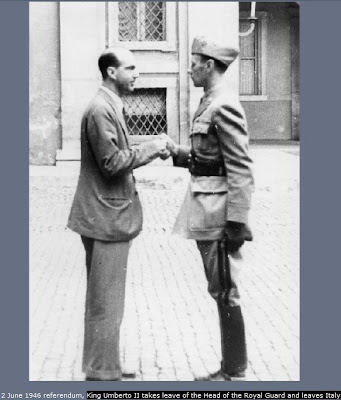 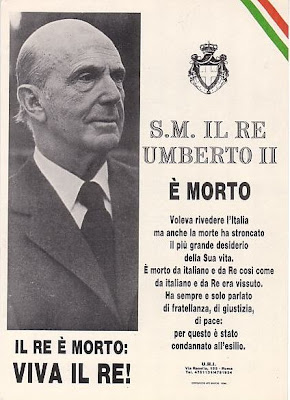 The ABC continues to deny being anti-monarchist. It is more as if the ABC sees itself as a victim of a “royal censorship”, especially after the BBC threatened to block the ABC from its entire royal wedding coverage unless the ABC cancelled plans for as “alternative” Chaser’s Royal Wedding Commentary on ABC2. Known for their “undergraduate style” (The Age), ABC’s director of television, Kim Dalton, implied the incident was a form of censorship: “In Australia, we’re not used to these sorts of conditions being placed on the media and you can’t help but observe these restrictions are being placed on the media on behalf of a future head of state of Australia.”

This remark came shortly after Trevor Graham, “a filmmaker best known for his progressive documentaries" (The Age, 21st April 2011) had his own encounter with the ABC's attitude. When Graham, who was described by The Age as "firmly believing that Australia should become a republic” suggested his latest documentary on Australia’s Royal Family A Royal Romance to the ABC “there were sneers that the line he was taking wasn’t as pro-republican as it ‘should have been or could have been’.”

In the end the film was shown on ABC1, but it is obvious, that the public broadcaster’s sympathies lies more with a royal satire which the Chasers thought they could provide.

On the eve of the Royal Wedding Statewide Mornings presenter Leon Compton took the opportunity to analyse the on-going question of whether Australia should become a Republic or remain a loyal servant to the British Monarchy.

An equal treatment would look differently. Since when is an Australian Monarchist “a loyal servant to the British Monarch”? The ”republic” as a neutral term, but the Monarchy connect with a negative inclination. Is this really the open-mindedness the ABC is officially proclaiming?

And we won’t mention the last Sunday's “Insiders” programme that made up a story about the Queen’s republican tendencies. Just ridiculous, not even good as an April’s fool joke.

The ABC must do more to dissipate doubts of its objectivity.
Posted by radical royalist at 6:44 am No comments:

Just before Easter Libya's Crown Prince Mohammed as-Senussi made a high-profile appearance in the European Parliament EurActive reported. He presented himself as a constitutionalist and lobbied for his country's 1951 monarchic constitution to provide the building blocks of the future Libya. 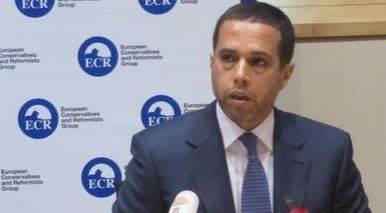 The heir to the throne of Libya addressed, in Arabic, a crowded meeting room before taking some questions. The event, organised by the Conservative and Reformists (ECR) group, was attended by MEPs across party lines, curious to see the monarch-in-waiting of the oil-rich country.

Crown Prince Mohammed as-Senussi told the story of his family. Libyan dictator Muammar Qaddafi ousted his great uncle, King Idris I, from power in 1969, and today's Crown Prince and his family faced the brutality of the regime too.

In 1988, he was banished overseas by the regime and lived in the UK with other members of the Liyan Royal Family. Before dying in 1992, his father, Prince Hasan as-Senussi, appointed him as his successor as Crown Prince and head of the Royal House of Libya.

After 1992, he said he had been working with his brothers with the Libyan opposition, organising different events in Europe.

Crown Prince Mohammed as-Senussi said he wanted more Western nations and Arab countries to join France and the UK, the leaders of which he personally thanked for enforcing the no-fly zone, in putting pressure on Qaddafi. He did not enter into details of what this pressure might be.

Asked to explain his attitude vis-a-vis the Benghazi-based Libyan Interim Council, he said he had good relations with them, but stressed that the key word was that this was indeed an interim body. He insisted that the Libyan constitution of 1951, which marked the country's independence from Italy and set up a constitutional and hereditary monarchy, provides the building blocks for the future of the country.

But he left the door open for adaptations to the constitution to be made and for the Libyan people to decide which form of democracy they wanted, whether a constitutional monarchy or a republic.

Asked to specify if he was appealing for ground troops to be sent to Libya, His Royal Highness explained that for any decision, the will of the Libyan people was of primary importance. He added that this was not the case at present, but that the situation might change over time.
Posted by radical royalist at 8:57 am No comments: