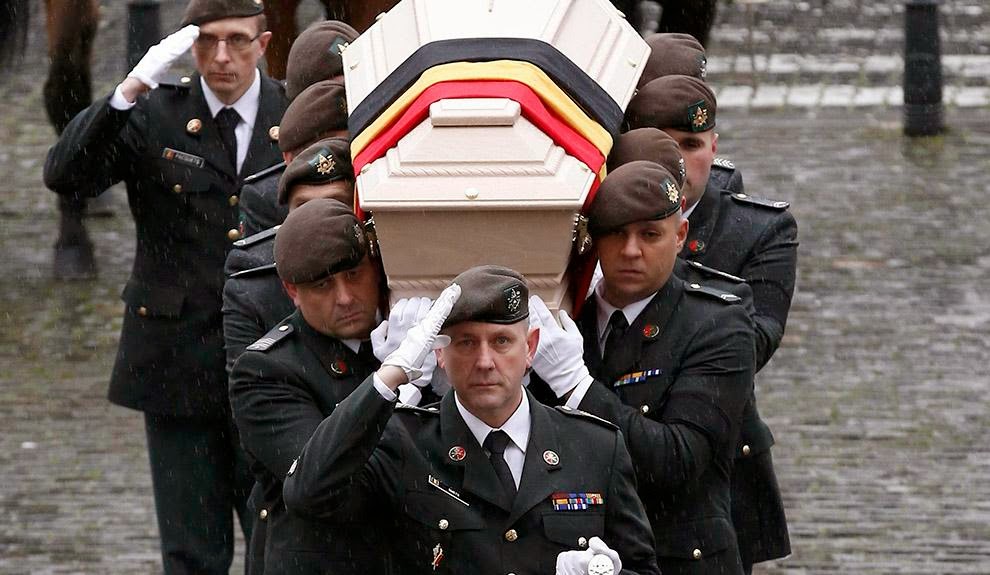 The sky over Brussels was in mourning. The funeral of Queen Fabiola of Belgium was a sad event for the country, but the rainy, windy and over-all wintry weather added to the « tristesse  » as the French would call it. Only a few thousand Belgians lined the streets and gathered in front of the churches Saints Michel et Gudule and Notre-Dame de Laeken to farewell the Spanish-born noblewoman Doña Fabiola Fernanda Maria de las Victorias Antonia Adelaïda de Mora y Aragón who had been their Queen for 33 years. With her husband, the late King Baudouin of the Belgians, whom she had married on 15th December 1960 in one of the first internationally live broadcast royal weddings, she became a symbol of the Belgian unity. When King Baudouin died of a heart attack on 31st July 1993, she insisted on not wearing black, but white. She stuck out at the funeral procession through the streets of Brussels. 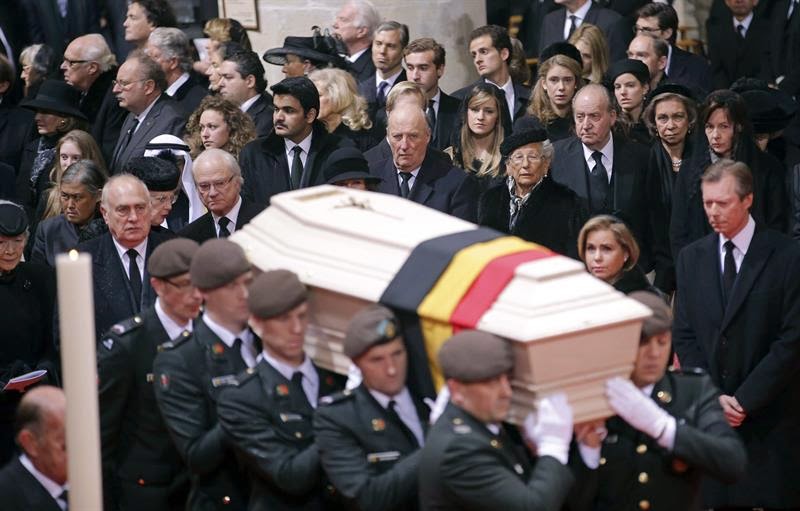 This Friday not only Belgian nationals, Spaniards or other Europeans paid their respect. From all over the world members of royal families flew to Brussels to assist in the religious service. Japan's Empress Michiko, Queen Margrethe II of Denmark, Prince Moulay Rachid El Alaoui of Morocco, King Mohammed VI's brother, and Sweden's Carl XVI Gustaf and Queen Silvia, where among the guests. King Harald V and his sister Princess Astrid came from Norway. Princess Sirindhorn flew in from Thailand and sat next to Princess Beatrix, the former Queen Beatrix of the Netherlands. King Juan Carlos and Queen Sofia from Spain joined the congregation singing a Spanish hymn. Prince Vittorio Emmanuele, Prince of Naples, whose mother was a sister of King Leopold III of the Belgians, sat next to Dom Duarte of Portugal, Duke of Bragança. France was represented by Prince Eudes of Orléans, the youngest son of the Count of Paris. The Habsburg family were represented by the head of the Imperial House, Archduke Karl, and other members who found refuge in Belgium, first and foremost Archduke Lorenz who is married to Princess Astrid of Belgium, sister of King Philippe I. Luxemburg's Grand Ducal family came from the neighbouring country, including 90 year old Grand Duke Jean in a wheel chair. At some stage Duke Michael of Württemberg was visible, but this wasn't confirmed by the commentator, the well-known French journalist Stéphane Bern who was at RTL-Belgium giving very useful explanations. He knew the members of Kuwait's and Qatar's royal family and could name the members of the important noble families of Belgium, like the Prince de Ligne. 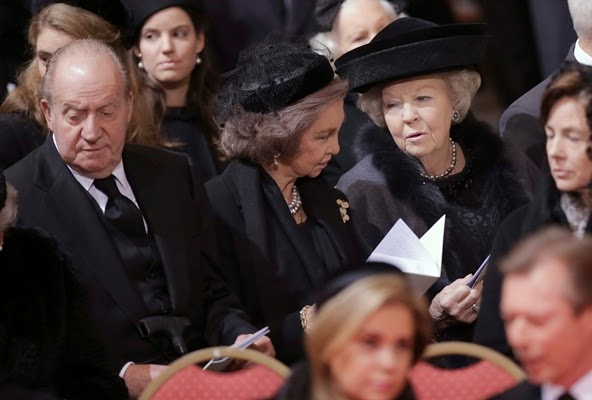 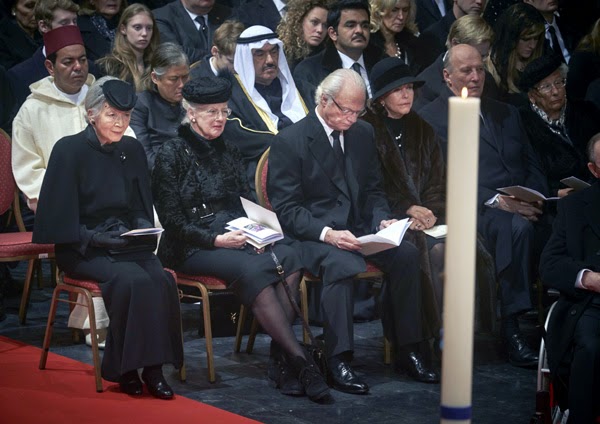 In this list of royal guests one house is missing: Windsor. Her Majesty did not send a member of the British Royal Family, but had asked her ambassador in Brussels, H.E. Alison Rose, to represent her at the funeral service. The Belgians were not amused about being snubbed: L'absence de la famille royale britannique énerve les réseaux sociaux. 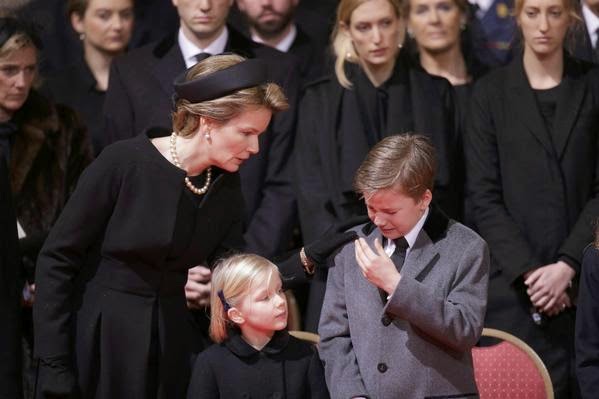 None of the members of the Belgian Royal Family were missing. King Philippe and Queen Mathilde led the mourners and were visibly grief stricken. And so were their children, the hereditary Princess Elisabeth, her brother Prince Gabriel and the two youngest, Prince Emmanuel and Princess Eléonore. King Albert II, who had abdicated last year, and his wife Queen Paola looked shaken. And so was Prince Laurent, their youngest son, who had been in hospital for a couple of weeks this year. But even he had to smile, when a Spanish choir, La chorale hispanique de Vilvorde (a suburb of Brussels), sang "Salve Rociera”. Even King Juan Carlos joined in and the members of Queen Fabiola's Spanish family sang this traditional funeral song.

The body of the late Queen Fabiola was interred in the royal crypt at the church Notre-Dame de Laeken. Before she was finally laid to rest, two members of her household paid their respect to their old "patronne" (boss). It was a lovely and moving good-bye from two of her closest collaborators. The congregation had to smile, when the marshal of her household repeated her favourite gesture (raising to joined hands) and her favourite phrase for praise: C'est phénoménal! 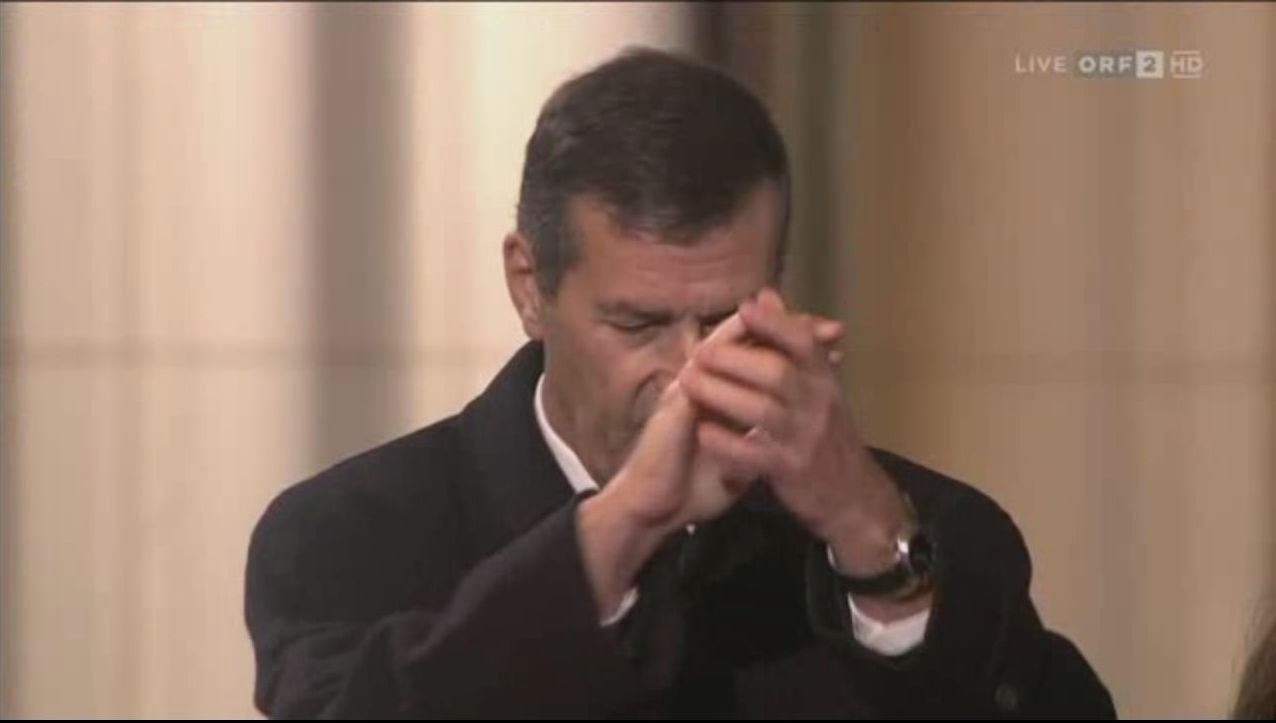