Service to the community is a key theme for a visit which is part of the Queen’s Diamond Jubilee celebrations.

Service to the community – the central theme of The Queen’s Diamond Jubilee celebrations – will be highlighted by The Prince of Wales and The Duchess of Cornwall as they visit Papua-New Guinea, Australia and New Zealand next month.

During a two week visit to the three countries, to celebrate The Queen’s Diamond Jubilee, The Prince and The Duchess will meet a wide cross section of people who contribute to their community, including villagers restoring coastal mangroves in Boera Village, Papua-New Guinea, National Rugby League stars who help mentor and inspire indigenous children in Australia and veterans and currently serving military personnel on Armistice Day in Auckland, New Zealand. 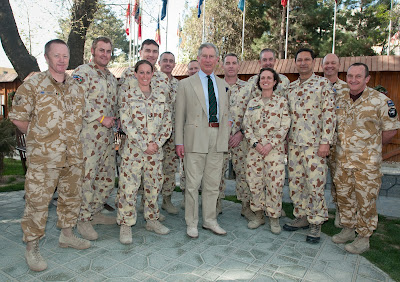 In addition to service to the community, other key themes of the visit are encouragement of economic growth and innovation, promotion of youth enterprise, celebration of sport in the community and on-going support for the Armed Forces. In addition, a number of events reflect Her Royal Highness’s particular interests in literacy, osteoporosis and animal welfare.
Their Royal Highnesses’ programme, which has been drawn up by Government representatives from each of the three countries to be visited, aims to reach out to as wide a cross section of people as possible. The itinerary in each country includes engagements in rural locations – Boera Village (Papua-New Guinea), Longreach and Richmond (Australia) and Feilding (New Zealand) - as well as major cities such as Port Moresby, Melbourne, Adelaide, Hobart, Sydney, Canberra, Auckland, Wellington and Christchurch.

The programme includes extensive opportunities for public participation. In addition to celebratory Jubilee receptions and site-specific visits, such as to schools, youth and sports centres and military bases, Their Royal Highnesses will be taking part in an ecumenical Service of Worship and cultural welcome at the Sir John Guise Stadium in Port Moresby, joining hundreds of local families at a community BBQ in Longreach, Queensland, watching with thousands of others the world-famous Melbourne Cup, attending a special birthday party in Wellington and attending the 150th anniversary Agricultural & Pastoral Show in Canterbury.

In support of the Armed Forces, across all three countries Their Royal Highnesses will lay wreaths during Remembrance ceremonies, inspect Guards of Honour and meet military personnel and their families. In addition, His Royal Highness will present Colours to the Pacific Islands Regiment in Papua New Guinea and Her Royal Highness will inspect the parade and be appointed as the Colonel-In-Chief of the Royal Australian Corps of Military Police, be afforded a Royal Salute and inspect the Royal Guard and Band at Victoria Barracks, Sydney.

The key elements of the tour in Australia are below:

LONGREACH
• A Welcome to Country by Indigenous custodians

• The Prince of Wales, as Patron, officially naming a new aircraft for the Royal Flying Doctor Service at the QANTAS Museum, Longreach;

• joining hundreds of families at the Diamond Jubilee Community BBQ in Longreach;


MELBOURNE
• The Prince of Wales meeting tapestry makers demonstrating traditional weaving skills during a visit to the Australian Tapestry Workshop;

• The Prince of Wales viewing cricket skills clinics and meeting young participants in Cricket Victoria’s ‘Harmony’ programme for migrant and Indigenous communities at the Melbourne Cricket Ground (MCG), including players from men's and women's representative teams;

• The Prince of Wales attending the Housing Melbourne Symposium on sustainable urbanism at the National Gallery of Victoria, Melbourne;

• The Duchess of Cornwall attending a reception for Osteoporosis Australia at Government House, Melbourne;

• gardening and cooking with the children of the Kilkenny Primary School, Adelaide, together with chef Stephanie Alexander;

• participating in a showcase of South Australia’s Food and Wine Industry at Penfolds Vineyard, Adelaide;

• The Prince of Wales attending an event to promote South Australia’s economic innovation at the Adelaide Convention Centre;

• The Duchess of Cornwall attending a reception with Tasmanian Rural Women in Richmond, Tasmania;

• The Prince of Wales seeing sheep shearing and wool classing during a visit to a sheep stud in Sorrell, Tasmania;

• The Prince of Wales seeing demonstrations and displays from a range of Antarctic and Marine Research programmes, Hobart;


SYDNEY
• meeting members of the Australian Defence Force recently returned from active service, and their families, at Garden Island, Sydney, including a Royal Salute and inspection of Royal Guard and Band;

• promoting the Australian Wool industry at the Museum of Contemporary Art Sydney;

• The Prince of Wales highlighting the work of the New South Wales’ lifesavers and other emergency workers and volunteers at a reception at Icebergs Club, Bondi Beach;

• The Duchess of Cornwall accepting Colonel in Chief of the Royal Australian Corps of Military Police, Victoria Barracks Sydney, including Royal Salute and inspection of Royal and Band;

• The Duchess of Cornwall attending a reception for leading women in the community at Government House;

• Official meetings with the Governor-General, Prime Minister and Leader of the Opposition;

The Royal Couple then depart for New Zealand.


A birthday present for The Duchess of Cornwall
The Australian Monarchist League (AML) has proceeded to commission the manufacture of a brooch (consisting of an Australian pearl nestled into a eucalyptus shaped leaf in white gold with the Southern Cross set in Australian gemstones) to be presented to HRH The Duchess of Cornwall by the League to commemorate both her 65th birthday (last July) and her first visit to Australia in just over three week's time.

If you wish to contribute, please use one of the following formats:

Donations can be made via the contribution form on the AML's website - www.monarchist.org.au - click onto 'Contribution' at the bottom.

Or you can pay by credit card and email to: monarchist@bigpond.com

Or you can always pay via bank transfer to our account:

Those who contribute may also wish to send us a message of not more than 30 words for inclusion in the card which will accompany the gift to Her Royal Highness.
Posted by radical royalist at 5:03 am No comments: