The Duke is 23rd in line to the throne, and is the first person in line who is not a direct descendent of King George VI; his father was Prince Henry, The Duke of Gloucester, younger brother to King Edward VIII and King George VI; this also makes him the youngest grandchild of King George V, the eldest being Queen Elizabeth.

After spending his childhood years in Australia, The Duke of Gloucester has constantly returned to Australia. In 2012 he attended the Grand Council Meeting at the Shangri-La Sydney, the Rocks, Sydney, as the Grand Prior of the Most Venerable Order of the Hospital of St. John of Jerusalem.

His Royal Highness, who is Patron  of the Nuffield Farming Scholarships Trust, met Nuffield Australia Farming Scholars in Sydney. The charity organisation provides a scholarship scheme for the benefit of the Australian farming community. 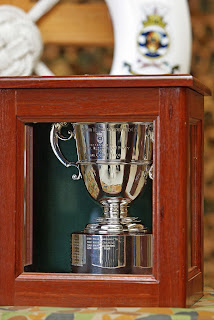 The Duke of Gloucester Cup

The Duke of Gloucester Cup, the three awards are presented to the most efficient infantry battalion of the Australian Army, ship of the Royal Australian Navy (RAN), and squadron of the Royal Australian Air Force (RAAF) during the previous year. The awards were created by HRH Prince Henry, The Duke of Gloucester in 1946, while he was serving as the Governor-General of Australia, and were first presented in 1947. The RAAF's Gloucester Cup recognises the most proficient flying squadron during a calendar year.

Royal Duties
Prince Richard is President of Cancer Research UK, as well as The National Association of Clubs for Young People, and is a patron of British Association of Friends of Museums, Richard III Society and Normandy Veterans Association.

TRH The Duke and Duchess of Gloucester represented Her Majesty The Queen at the Mass for the Inauguration of Pope Francis’ Pontificate on 19th March 2013. They also attended the Beatification Mass for Pope John Paul II on 1st May 2011.

Posted by radical royalist at 9:11 am No comments:

His Royal Highness Crown Prince Alexander II accepted with great pleasure to be the patron of the project “Album in Memory of our Ancestors in the Great War,” that has been realised by the Association of the Descendants of Serbian Warriors 1912 – 1920.

“I am very happy that the Association of descendants of Serbian Warriors 1912 – 1920 initiated such a project during year when we mark beginning of the war that was remembered as the Great War, as a first war that was titled a World War, and that left tragic marks all around the world. History obliges us not to forget this cathartic experience, but to come to sense and start the restitution of general values: love, honour, of historic culture, creativity and above all – humanity. History calls upon us to take personal responsibility for the future of our ancestors, and this project is a great step forward on that path. As the great grandson of His Majesty King Peter I who went through Golgotha of the Great War together with his sons and his people, as my grandfather of HRH Regent Alexander (later His Majesty King Alexander I) who was supreme commander of Serbian Army in World War I, I had the obligation and pleasure to accept to be patron of this very important project”, Crown Prince Alexander emphasised.

The project “Album in Memory of our Ancestors in the Great War” has the main goal to increase visibility and sustainability of Serbian cultural heritage as an important part of the cultural heritage of European nations at the time of First World War. One of the primary goals is to empower citizens who chose to take part in it to give their personal touch by providing relevant documents and historic sources in marking the Centenary of the First World War.

The creation of this Album will give an opportunity for all to submit online scans of photographs of their ancestors, biographic texts, diaries, medals, letters of soldiers and other materials of importance for Serbian and world history. At the end of the project, 100 chosen photographs will be printed and exhibited at places of historic importance of this period.

Photos and other documents could be submitted via web site http://slavnim-precima.rs where all material collected so far could be seen.

A web portal and data base of materials will be put at the disposal of historians and other professionals for research and other purposes, and we will all have a lasting memory of our ancestors who fought honourably for their freedom.

Marking the centenary of the First World War through promotion of Serbian history, development of positive international image, promotion of freedom loving characteristics of Serbian people, and emphasising membership within the European family of nations;

Networking between young people in Serbia and their peers in the Diaspora;

Building an Internet data base of photos from the First World War;
Posted by radical royalist at 12:58 am No comments: