The Prince of Wales and The Duchess of Cornwall’s visit to Australia for The Queen’s Diamond Jubilee has come to an end in Canberra on 10th November 2012.

Their Royal Highnesses have experienced everything from an Aussie barbie with outback cattlemen to the excitement of the Melbourne Cup during their six-day trip to the nation. 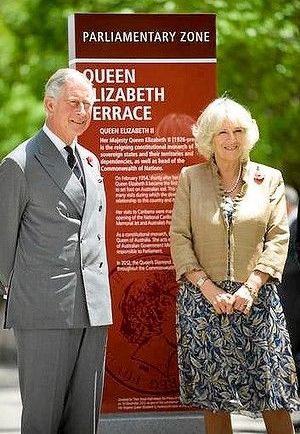 The royal couple ended their Diamond Jubilee visit in the capital Canberra where they renamed a section of road close to the striking Parliament House - Queen Elizabeth Terrace.

Prime Minister Julia Gillard welcomed The Prince and Duchess when they arrived at the thoroughfare which was lined with crowds and she paid tribute to The Queen's devotion to duty:


Your Royal Highnesses, I bid you a special welcome to our country and our capital.

To The Prince of Wales, you are a familiar visitor to these shores.


In you, the people of Australia know they have a true and sympathetic friend.

To The Duchess of Cornwall, I hope you have discovered the warmth of the Australian character and a land you will always feel welcome.

Since landing at Longreach on Monday, these have been days to explore and revisit the facets of our landscape and culture:

From the Outback, to the vineyards of South Australia, and the race that stops nation.

Now, we gather here in this capital to reflect on the bonds of history and affinity which made Australia the nation it is today.

The Father of Federation, Sir Henry Parkes, called it the “crimson thread of kinship” and the associations are all around us.

Not far from here is found the writing table Queen Victoria used to sign into law the Constitution that led to the creation of this capital.

Up on Capital Hill meets the Federal Parliament first inaugurated by King George V as Duke of Cornwall and York in 1901.

A quarter of a century later, another Duke of York came to open these old Parliament buildings – a shy prince who came to show the ‘heart and stomach of a king’.

Like Your Royal Highness, he too was accompanied by a gracious Duchess. Your beloved grandmother.

It is a story also inscribed in the streets and parks of this beautiful zone where, one by one, the East-West terraces have been named in recognition of our monarchs since Federation: Queen Victoria Terrace, King Edward Terrace, King George Terrace.

Today, the symmetry is made complete with the naming of Queen Elizabeth Terrace.

At the same time, the green space in front of Old Parliament House and two roads either side will stand in honour of Sir Henry Parkes reflecting the mix of ancient tradition and contemporary democracy that underpin our constitutional order.

This place will be a lasting tribute to Her Majesty The Queen on the occasion of her Diamond Jubilee inscribed forever in the architecture of this capital.

It will remind future generations that for more than half of our journey as a united nation, Elizabeth the Second has been our monarch.

No-one in the history of our Federation has shared more consistently in the affairs of our Commonwealth or followed them with deeper interest and goodwill.

As Canberra prepares for its centenary, it is fitting that The Queen’s life of duty is given recognition here in our nation’s heart and her wisdom and dignity are honoured among the people she has so faithfully served.

I thank Your Royal Highnesses for sharing this commemoration with us.

And I know you will convey to Her Majesty the sentiments we share in naming this place today.

No Head of State could be more worthy of this honour, and no nation could more freely or gratefully bestow it.

The royal couple went on a brief walkabout in the newly-named terrace, meeting people who had been waiting patiently.


Sisters-in-law Crystal and Leanne Tunningley, 33, were ecstatic after meeting The Duchess. Crystal, 28, from Canberra, said: "Camilla was saying she loved being in Canberra and it was so sad that she had to go."

Later The Prince and Duchess held a private meeting with the Queen's representative in Australia, Governor General Quentin Bryce and her husband Michael.

The Prince then held a series of talks in the imposing Government House, first with Ms Gillard, and then the leader of the opposition Tony Abbott, who said "it was a real thrill" to meet the prince.

In the grounds of the historic building a Diamond Jubilee buffet lunch, among the guests were leading politicians, including former prime minister John Howard, broadcasters, business leaders, sports personalities and arts figures. Mrs Bryce said after her accession to the throne in 1952, The Queen showed remarkable qualities.

She said: "In the six decades since across times of extraordinary and constant change a symbol steadfast - dignity, strength, a source of courage and inspiration to so many people."

In a short speech The Prince praised the volunteering efforts of many Australians - something that reflected the theme of the Diamond Jubilee, service to others.

The Prince, who confessed they would leave Australia with "great sadness", said: "These are the people of course who provide a glue to such a, I think, diverse and energetic and determined society.

"And from that point of view it has been a real joy for my wife and I to help celebrate that wonderful aspect of society in Australia.

"To pay a tribute, for what it's worth, to all these marvellous people, and to just thank them for all they do to make Australia such a very special place."

Before leaving for New Zealand, the final leg of the Diamond Jubilee tour, the royal couple paid their respects to Australia's war dead at the nation's war memorial on the eve of Remembrance Sunday. 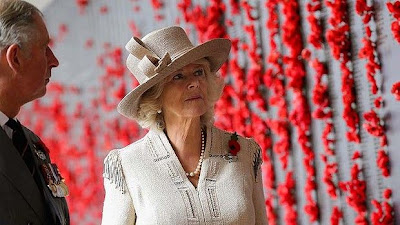 More than 100,000 men and women have died serving the Commonwealth country since the First World War and The Prince placed a floral tribute at the monument to recognise their ultimate sacrifice.

The Australian War Memorial in Canberra is an imposing sandstone-clad Byzantine style building with a copper-covered dome.

The royal couple walked into the Hall of Memories where the remains of a First World War serviceman are interred. At each corner of the Tomb of the Unknown Australian Soldier stood a member of a ceremonial unit from the Australian Defence Force.

Above Their Royal Highnesses’ heads was an ornate dome and they were surrounded by lavishly decorated mosaic walls featuring more than six million coloured glass tiles in a design created by Australian artist Napier Waller. The Prince laid a large wreath on the tomb before the Last Post was sounded by a bugler and a minute's silence was observed.

In the memorial's open air commemorative area were written the names of Australia's fallen and the royal couple walked past the long lists stopping at the names of those who died on operations in Afghanistan. Before leaving the royals went on a brief walkabout to meet the crowds outside the memorial.

Even the Fairfax media acknowledged: Capital embrace a hit as royals leave their mark on the city.
Posted by radical royalist at 3:04 am