His Royal Highness Prince Charles, The Prince of Wales, had his first encounter with Melburnians on this tour. This morning he visited the Australian Tapestry Workshop in South Melbourne and a fairly large crowd welcomed him, a well-orchestrated choir sang "We love you" and it seemed: They really meant it.

His Royal Highness received several bouquets of flowers and on his way inside chatted with bystanders. 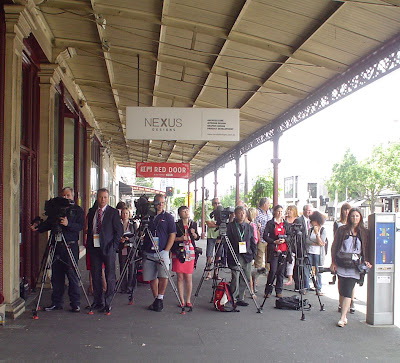 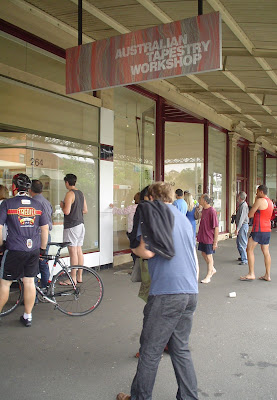 Even when meeting royalty, Australians are casual. 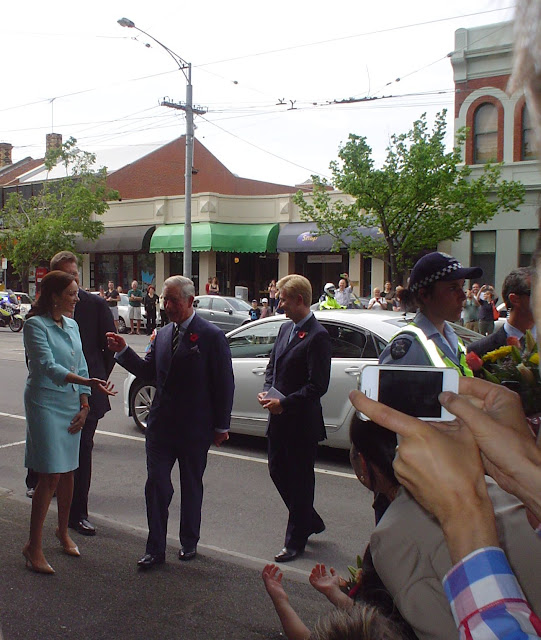 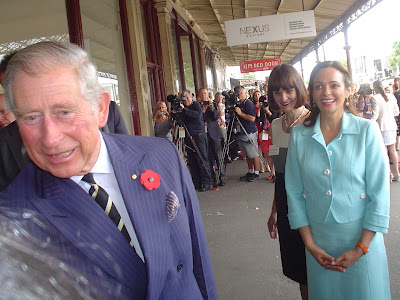 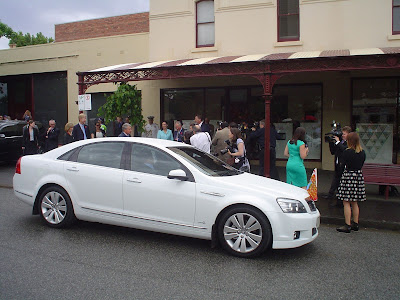 During the visit The Prince met children working on a joint project between the Australian Tapestry Workshop and his Prince's School of Traditional Arts.

His Royal Highness sat down amongst the local youngsters who had made a large geometric piece of artwork and spent a few minutes listening to them explain how they produced their work. 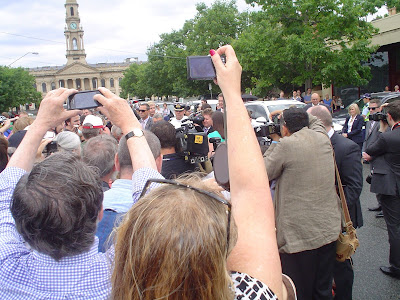 Find the prince... He is in there, somewhere! 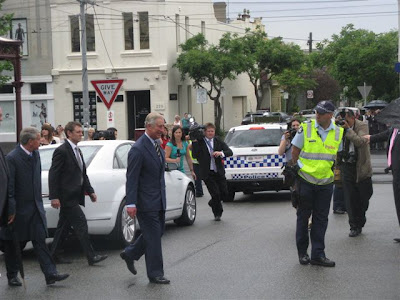 Before leaving Prince Charles crossed the street to chat once again with members of the crowd.

Here's a report from Neville. He gave permission to post it.
Many thanks, Neville, and great you had a wonderful time in South Melbourne.

"After a humid, restless night of little sleep (thanks in no small part to my dog Bert snoring loud enough to wake the dead), I got up feeling tired and fractious. It was not hot this morning, just overcast and muggy. I decided to take Bert with me as he enjoys a good outing. So we got the train into Spencer Street and walked to South Melbourne, arriving with about an hour to spare before the Prince arrived. There were already people milling about, along with media crews and several Victoria Police officers. Bert and I settled down and I started to play "spot the undercover detective": it was not very difficult as they are pretty obvious. Eventually is was time to claim a position, and we got quite close to the front. There were lots of other dogs (some mutt in the front row got all the attention, but it was nowhere near as cute as my Bert). Soon enough there was a roar of motorcycles as the Victoria Police motorcycle squad arrived. Don't get me wrong, I think motorcycle outriders are a great way to escort a royal guest, but a dozen of them? No matter, before we knew it the Prince of Wales had arrived. There was a Christian group who started a chant of "we love you", complete with hand actions. I don't think the Prince quite knew what to make of them. The Prince made his way into the Australian Tapestry Workshop (stopping to pat the aforementioned mutt). I held Bert up for a look (he can be seen in some of the news reports, with his tongue hanging out), and he snorted and sneezed, all over the shoulder of a young man in front of me.

"Once he was inside we made our way around the corner to where the Prince would depart. We got a good spot in the front row next to the car. I don't think the officials had expected such a large crowd and I noticed the police were in a little huddle discussing what to do. Then, to my disappointment, we were all told to go out onto the street. I did not move fast enough and ended up about ten metres away from the car. Then, with perfect timing, it started to rain. All these fair weather royalists ran for cover (I just want to say that I consider such actions unspeakably soft: a little bit of rain never hurt anyone). Giant gaps appeared along the road and Bert and I made our move. We nabbed a perfect position just opposite the royal car. There was no guarantee that the Prince would do a walkabout, particularly as it was now raining, but I was still happy to get a good view to wave goodbye. Before long the Premier of Victoria appeared at the door, so we knew the Prince would be out in a moment. An officious woman from Government House (who earlier was most unfriendly when I asked her from where the car would depart) unfurled the Prince of Wales standard on the front of the car. A woman, about two metres away from me, started yelling "CHARLES, COME OVER HERE", and, to my surprise, it seemed to work (probably helped by the rain stopping). 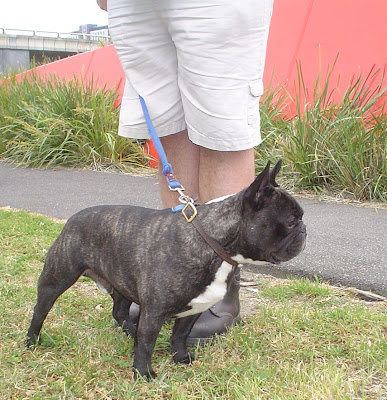 "The Prince headed over to meet the crowd. He looked very tired, but was in good form chatting and laughing with everyone. He was wearing his remembrance poppy, and the lapel pin of a Knight of the Order of Australia. A woman told him how much she admires the work he has done at Poundbury and he seemed genuinely pleased. He stopped in front of me and shook my hand. "Welcome back to Melbourne, Your Royal Highness" I said. He looked at my backpack, and the chap behind me who also wore a backpack, and asked; "Are you cyclists? You're all carry those great big things on your backs". I told him I use mine to hold my dog's water and water bowl. He looked down at Bert and I said "this is Bert, Sir", "Bert?" he replied (at this stage Bert, not very impressed, was standing with his bum pointed at the Prince". The Prince then said "one of these days one of them is going to take off my hand." I reassured him that Bert was more likely to lick off his hand. He then moved on, and a young man behind me, holding up a copy of a book on the restoration of Dumfries House, congratulated him on all he had done for the house. The Prince looked really chuffed.

"Then it was all over. The motorcycles were revving up, the car had crawled to the corner, and the officials were winding things up. The Prince got into the car and headed off for his next engagement at the MCG. Bert and I headed back to Spencer Street, stopping at a little park for Bert to prepare himself for the train trip home. I turned my back for a couple of seconds, and Bert went straight into the Yarra River. It is a little known fact that French Bulldogs cannot swim; they are top heavy and sink like a stone. I had images of having dive in to rescue him. But luckily he kept his foothold and came out when I called him. So all in all it was a very eventful morning. Bert is now sound asleep, oblivious to the fact that he has already appeared in a couple of news bulletins."
Posted by radical royalist at 3:22 am

Great article,well written! I enjoyed it very much!!