Victoria needs more pomp and circumstance rather than blandness

The Age’s and The Sunday Age’s dislike for anything royal is well-known. But this Sunday’s attack takes it to a new level. In today's editorial Return to vice-regal pomp risks alienating Victorians The Sunday Age ridiculously praises governors who breached their Oath of Allegiance by “proposing changes to the constitution that would remove references to the monarchy to allow a transition to a republic”. It might be added doing so without any reference to the people. 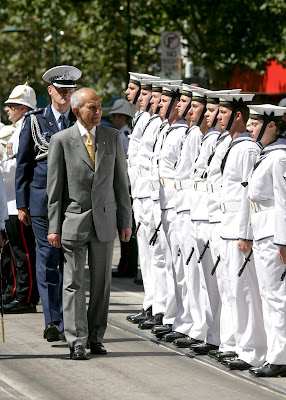 Too much pomp? Governor de Kretser inspecting a guard of the Royal Australian Navy.

What was Governor Alex Chernov’s crime according to The Sunday Age?

“Mr Chernov wants functions at Government House to be run on a 'non-commercial basis'. Yet at the fashion festival launch, he acknowledged the festival was 'a significant major event' and one of the 'world's leading events of its kind'. It is also an important part of the economy, and subsidised by taxpayers - as is the Governor himself while he holds the office and lives in his elegant residence with its landscaped gardens. (At the fashion party, Mr Chernov invited guests to inspect some of the rooms.)”

For The Sunday Age only a republican governor is a good governor. But the editorialist goes further by deciding what is relevant to Victorians and what is not. It’s in the same logic that s/he determines: “They [vice-regal appointments] exist for historic and legal reasons but also represent a world view and system of government that is no longer relevant to many Australians.” By the term “to many Australians” it is clear, that the opposite is equally true: To many Australians vice-regal appointments are a significant part of the political structure for the state and the federation itself. While the Monarch is absent, the Governors(-General) represent the crown. It is highly bizarre that the Fairfax editorialist expects them to act as promoters of republicanism.

Significantly The Sunday Age’s agitation led nowhere. When checking the editorial on-line, the RadicalRoyalist was the only one reading it. Doesn’t say that all about The Sunday Age's relevance?

Posted by radical royalist at 12:32 am