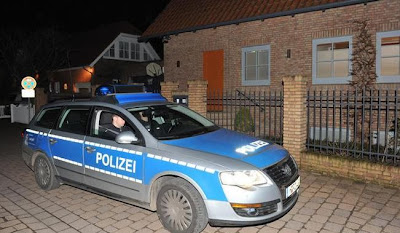 Christian Wulff stepped down as president on 17th February just hours after prosecutors said that they would seek to lift his immunity from prosecution. Despite the dishonourable "retirement" the 52-year-old will receive an annual stipend of 199,000 € annually for the rest of his life, despite the fact that he had stepped down after less than two years in office, 598 days, to be precise. Should he die before his wife, his widow, who is only 38 years old, will step in and receive the full pension for life. 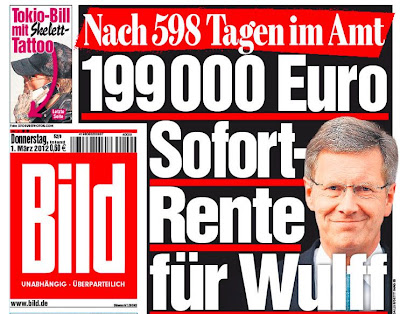 But it is not only this generous pension that infuriates the German public, it is the fact that all formers presidents plus one widow – six all in all – are entitled to an office, staff and a chauffeur driven limousine. Per ex-president this adds up to one million €, or six million € in total for the state pensioners. 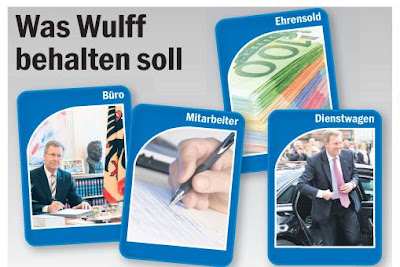 Graphic: What Wulff shall receive.
Posted by radical royalist at 4:39 am

These political hacks over here in the US are robbing us too. We need to either get back to republican simplicity or ask Prince Harry to take the throne. These politicians are nothing but thieves. I am ashamed of the POTUS when he travels in imperial style abroad.

Its the same here in the US. What a bunch of bandits. I'll trade the Queen for every politician in DC.