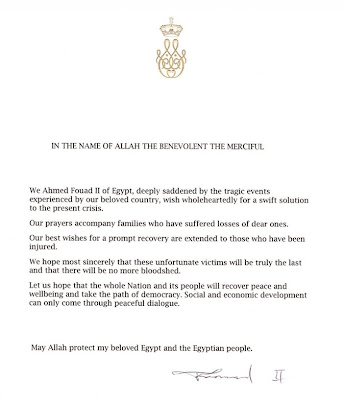 His Majesty King Fouad II of Egypt has released a statement 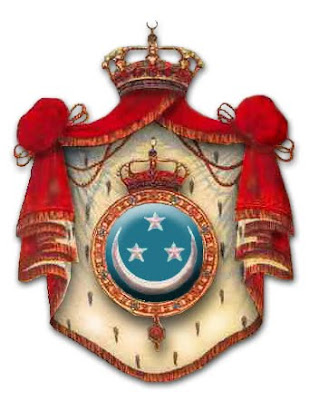 In the name of Allah the benevolent and the merciful.

"We Ahmed Fouad II of Egypt, deeply saddened by the tragic events experienced by our beloved country, wish wholeheartedly for a swift solution to the present crisis.

"Our prayers accompany families who have suffered losses of dear ones.

"Our best wishes for a prompt recovery are extended to those who have been injured.

"We hope most sincerely that these unfortunate victims will be truly the last and that there will be no more bloodshed.

"Let us hope that the whole Nation and its people will recover peace and well being and take the path of democracy. Social and economic development can only come through peaceful dialogue.

"May Allah protect my beloved Egypt and the Egyptian people." 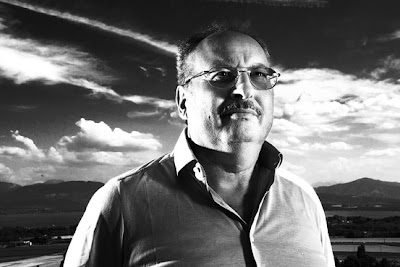 His Majesty, Fu'ād II, King of Egypt and the Sudan – Aḥmad Fu'ād (Arabic: الملك أحمد فؤاد الثاني Aḥmad Fu'ād) – was born on 16th January 1952. He ascended the throne on 26th July 1952 upon the abdication of his father, His Majesty King Fārūq I, who was forced by the putsch of army officers to leave the country. His Majesty, King Fu'ad II reigned for less than a year until 18th June 1953, when Egypt was declared a republic and he joined the rest of his family in exile in Switzerland, where he has continued to live to this day.

Posted by radical royalist at 10:55 pm