In Tehran Iranian Foreign Minister Manouchehr Mottaki met Sharif Ali Bin al-Hussein, the chairman of the Iraqi Constitutional Monarchy Movement and one of the claimants to the Iraqi throne.

The Tehran Times even published of photo of the Prince and Mr. Manouchehr Mottaki: 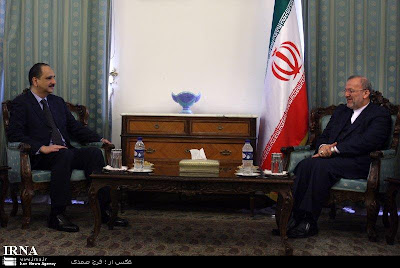 According to the newspaper, the Iranian foreign minister said that Iraq has been able to establish, what he called, "legal institutions" over the past seven years and added that Tehran has always supported these moves.

Sharif Ali said certain countries do not want to see democracy and the rule of law established in Iraq, but the Iraqi people are committed to democracy. If Tehran would tolerate a "Crowned Democracy" to use a term styled by King Constantine II of the Hellenes, remains an open question.
Posted by radical royalist at 6:54 am

i beg your pardon if i am too late to comment here..i have been fixing things and so...thanks alot that you concerns about the iraqi monarchy and i have read the king faisal II esay, it was so exicting to read it and all you write is true ..we were on the top in the monarchy period,iraqi people sufferd not since 2003 no...since 14 july 1958!
Well about sharif ali he is trying to have friends with all since iraq is mixed country.
I didn't hear him since 2005 and I dont know why..I dont think he has given up because the iraqi people in the 1991 told to his father to have a monarchy movement in London.