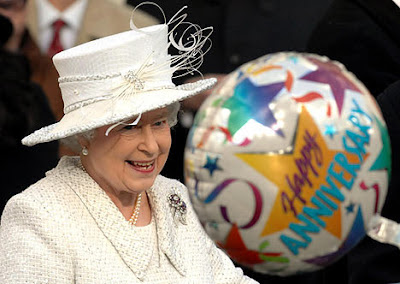 Shame on The Age. On the 60th Wedding Anniversary of the Queen of Australia and Prince Philip all Melbourne's daily newspaper could publish was a "Quote of the Day" on page 18, a remark of Prince Philip on breakfast.

Not a word about the church service in Westminster Abbey, no mentioning of the events that took place around the Diamond Wedding Anniversary.

The Age should be urged to drop its slogan: "If it matters to you, it matters to us." The Age is acting against all journalistic principles. There is no neutral news coverage on the Australian Monarchy. And that the referendum of 1999 was won by the Monarchists obviously does not please the editor and Fairfax, the newspaper's owners. They ignore that at least half of their readers must have voted in favour of the Monarchy. Why do they ignore the monarchist readers completely, treat them like children who cannot make up their own mind, who must be protected from monarchist news? I cannot help thinking that they are trying to impose on us, what matters to them.

Then there is the question: Why are they so insecure? Do they fear that reporting on royal events would lead to a huge increase in Monarchist sentiments in Australia?
Posted by radical royalist at 2:40 am