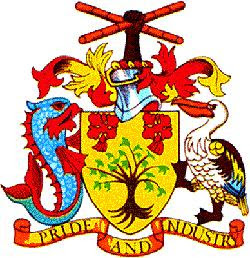 The Coat of Arms of Barbados was adopted upon independence in 1966 by decree of Queen Elizabeth, Queen of Barbados. Like other former British posessions in the Caribbean, the coat of arms has a helmet with a national symbol on top, and a shield beneath that is supported by two animals.

Republicans are braggarts. All the time and everywhere. Do you need proof? Here's the latest example for my assertion.

When republicans live in a Monarchy and work for its destruction, they claim the “vast majority” does not identify with the institution, the Monarchy is old fashioned and outdated, nobody is interested in the Royal Family and their duties, etc.

But when it comes to a referendum to introduce a republic, the great reformers suddenly shriek off and turn frightened to use the “r”-word. After all, it IS a frightful word connected with lots of atrocities throughout its history of the past 229 years. Look at all those fabolous republics from Zimbabwe via Pakistan to China.

What do republicans do when they call for a referendum, and when they try to avoid the simple question: “Do you want a Monarchy or a republic?”? They use a manipulative trick which indicates that they aren’t very certain about their cause:

The Deputy Prime Minister of Barbados has announced via the Caribbean Broadcasting Corporation that when the country goes to the polls in nine months, a referendum on whether the country should become a republic will be held concurrently. According to an unsourced statement on Wikipedia, the question is to be:
"Do you believe Barbados should have a Barbadian as its head of state?"

A perfidious question because it infers that everyone who votes NO and who wants to retain the Monarchy was Un-Barbadian, anti-national, unpatriotic.

The proposed question is far from a being a fair question if the Barbadians want the Monarchy or a republic. It does not address what relationship there should be between the people of Barbados and the Crown, but it is pure and unashamed populism. It is malicious. How will the Monarchists of Barbados lead their campaign for a “foreign Head of State”. Even though the Queen of Barbados is no foreigner, but as Barbadian as any other Barbadian, the supporters of the Monarchy will have a hard time to organise a referendum campaign.

Once again this example shows that republicans refer to referenda won by republicans as fair and open (Italy 1946 or Greece in 1973/74), however, in cases where the Monarchists won, they were manipulated (Australia 1999, Spain 1947, Greece 1935 and again 1946).

Republicans are bad losers. And never fair players, I may add.
Posted by radical royalist at 11:51 pm