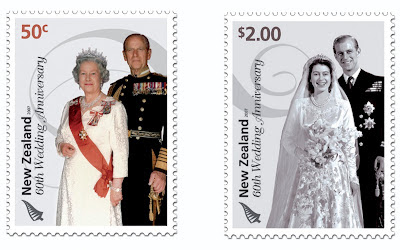 Australia and the Queen’s Wedding Jubilee

It is a rare occasion for every one, but for a British Monarch, a Diamond Wedding Jubilee is an exceptional celebration. No other royal couple could look back to 60 years of married life as Queen Elizabeth, Queen of Australia, and Prince Philip, the Duke of Edinburgh will be able to do on 20th November 2007.

The Queen of Australia is immensely popular Down Under and leading republican Malcolm Turnbull acknowledged this in a recent interview in The Royalist [sic!]: “According to [Turnbull], the issue [of another referendum on a republic] may only be won following the death or abdication (an unlikely prospect unless Her Majesty suffers significant illness) of the present monarch.”

Well, there had not been a precedence since there was no other Diamond Wedding Anniversary, or was there one, Mr. Howard?

The Australian Mail has no intention to follow for example New Zealand’s Post to issue a “Royal Wedding Anniversary” stamp. As a reply to my inquiries the Australian Mail stated: “Please note at this stage [9th September 2007] we have not been advised of any new stamp issue for the Diamond Jubilee.”

While the Australian politicians will pursue their electoral campaign the loyal subjects of Her Majesty Down Under can join celebrations organised by Monarchists, for example this one in Sydney:

Tuesday, 20 November , 2007: Luncheon, The Royal Society of ST. George, in the distinguished presence of HE The Governor of NSW, Professor Marie Bashir, Parliament House, Sydney to celebrate the Diamond Anniversary of HM The Queen and HRH The Duke of Edinburgh.
Posted by radical royalist at 12:50 am