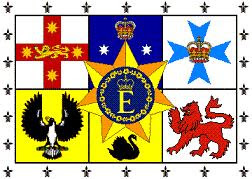 The Royal Standard for The Queen of Australia


Who has closer ties to Britain?
Isn't it funny, that one of the Australian republicans' "arguments" against the Monarchy is that "the relevance of the English crown to Australia has all but disappeared", but on the other hand, the ties between British and Australian politicians had never been more intense than these days.

"Labor and Labour ... became closer after Mr Rudd ALP leader and look set to deepen during his prime ministership", writes The Age in a report on how the British Labour Party's tactics won Kevin Rudd the federal elections. ("How the British came, saw and helped Rudd", James Button and Katharine Murphy, December 17, 2007 http://www.theage.com.au/news/national/how-the-british-came-saw-and-helped-rudd/2007/12/16/1197740090746.html?page=fullpage#contentSwap1

Of course it is not stupidity, when Barry Everingham referred to "the English crown" (in Republican call to arms, December 3, 2007, HeraldSun, Melbourne).

He knew exactly why he had chosen this term, which isn't even correct in the United Kingdom. All that matters in this country is the Australian Crown and Australian Monarchists get no aid from their British counterparts.

I welcome the ALP's move to seek help from the British Labour Party, because I think Australian politics could learn a lot from Europe. Looking to the US for examples of good policy making never got very far. But the ALP could see from many European examples how useful the Crown could be. The Australian Crown remains as beneficial for this country as the British Crown is for the British people and the Canadian Crown for the Canadians.
Posted by radical royalist at 3:45 am