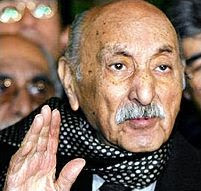 The King is dead - Long live the King of Afghanistan

So Hamid Karzai outlived the King.

His Majesty Al-Mutawakkil Allah, Pairaw ud-din-i-Matin-i-Islam Muhammad Zahir Shah, King of the God granted Kingdom of Afghanistan and its dependencies died 23rd July 2007 aged 92. Does this give Mr. Karzai a better legitimacy to rule the country as president? The best he could do to keep the Taliban forces at bay is to declare Crown Prince Ahmad Shah Khan next King of Afghanistan.

Only a monarch of Royal House of Afghanistan has a chance to unite the country. The more ISAF troops will be sent in, and the more efforts to control the country will be taken, the more the Afghans will resist against - as they see it - “foreign invaders and occupiers”.

In the eyes of many Afghans Mr. Karzai is only president in name, because they regard him as an instrument of the Americans. The situation has deteriorated in recent months. What Afghanistan needs is not more troops under the US command, but a really unifying figure: A KING!!
Posted by radical royalist at 5:24 am