The Monarchists won the Australian referendum in 1999

... even if republicans will never admit that fact. It must be a very frustrating exercise to propagandise for a republican regime for Australia and not get any closer to the fulfilment of toppling the Queen of Australia. On the 10th anniversary of the referendum The Age continues its bombardment against the Monarchy by insulting all those who voted No: “The Age has long believed that … becoming a republic will be a crucial mark of Australia's adulthood. Sadly, the past decade has witnessed a national retreat into childhood.”

Ten years of constant propaganda for “a” republic by the united Fairfax & Murdoch media, by the ABC and other TV stations and what is the result: Opinion polls show no more republican sentiment than in 1999. A more democratic attitude of the mighty media owners and their servants would suggest to accept the outcome of a democratic vote and live with it, but this is not what they do. They increase their attacks on the Australian Constitution and the institution of the Monarchy.

Today Monarchists all over Australia celebrate the outcome of the 1999 referendum and they have all reason doing so. Their opponents run around like headless chooks, contemplating new plebiscites and referenda, hoping for politicians to come to their rescue and give them “a” republic. Haven’t they noticed that relying on politicians is the most unreliable way to get results - and another reason to keep the Monarch who is above politics.

The Age even had the chutzpah to return to “the enthusiastic endorsement of republicanism at last year's 2020 Summit”, without mentioning that the summitteers were all handpicked and no Monarchist was considered worthy to take part in this show exercise. Is the republicans' aim to exclude all those who oppose their sailing into the rough sea of a politicians’ republic from speaking out for Queen and Monarchy? Fortunately we will not know, in which way republicans might exclude Monarchists from the Australian agora, because there is no likelihood that they will win a referendum.

All the contemplation on plebiscites (The Age: "A two-part plebiscite that asks the threshold question - should Australia become a republic - and then offers voters a choice of republican models could cheaply and conveniently be held at the time of the next federal election.") does not take into account that plebiscites do NOT change the constitution. What will republicans do, should they win the suggested plebiscites, but lose the referendum? Ignore the referendum? Return to square one? Repeat the referendum until the result pleases the The Age and the people behind the media? Or will they finally accept a democratic result and live with it?

Open questions, which The Age's editorialist did not bother to ask, even less dare to answer. 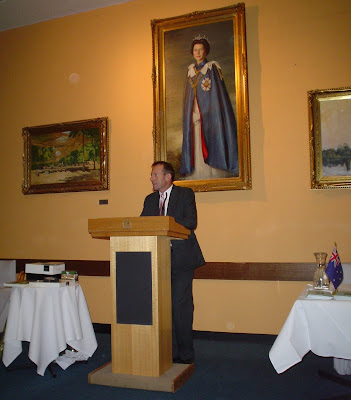