The Queen's portrait unveiled in Canberra's National Museum of Australia
Comment of an Age reader this morning: “It is so nice to open the newspaper and find a pleasant photo.” Sir William Dargie’s portrait "Her Majesty Queen Elizabeth the Second 1954“ was on page 3 of today’s Age.

The photo of the stunning portrait was a very pleasant surprise, but what about the accompanying article? Oh well, it kept its usual tone, however The Age could control its republicanism for a day: "AAAH, the golden, olden 1950s when a beautiful queen reigned and hundreds of thousands filled the streets to see her passing by when she made her astonishingly successful visit to Australia in 1954.

"A portrait of the young Queen by Australian artist[Sir] William Dargie painted that year at Buckingham Palace captured her sunny calm and authority. The image of the Queen in the famous 'Wattle dress' she had worn during that tour was lovingly reproduced for thousands of scout halls, government offices and citizenship certificates.

"Sir William waited for the first portrait to land safely [in Canberra] before sending off a second version he had painted at the same time as the first. On the back of the canvas he scrawled his explanation that "at least one version" would make it safely home if disaster struck.

"This second version went on to tour Australia before [Sir William] gave it to Lady Mary Hamilton Fairley, his host in London while he worked on the portraits.

"Now that painting is in Canberra's National Museum of Australia, which bought it this month for $146,400 from a Melbourne auction house acting for Fairley's descendants. 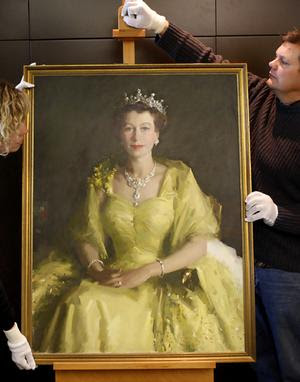 The museum's senior curator, Guy Hansen, who unveiled the work yesterday, admitted the appeal of the painting lies almost as much in what is jotted on the back of the canvas as in what is painted on its front.

"'We possibly would have bought it even without that story but the inscription is a lovely add-on,' Mr Hansen said.

"Although the first version of the painting can be seen in the Parliament House collection, it is on permanent display and cannot be loaned. The National Museum intends to tour its painting to show it as an important example of Australian social history.

"'It's hard for people under 60 to imagine the impact the Queen's visit had in 1954,' said Mr Hansen, 45. 'This was a definitive moment in Australia and this was incredibly important as the most memorable and ubiquitous image of the Queen's visit.'"

Although being under 60, I can imagine the impact of Her Majesty's visit. And so do republicans. That is the reason, why they do not want any member of our Royal Family coming to Australia. The success of Princess Anne's visit to the Victorian bushfires in February demonstrated the bond between the Australians and their Royal Family "and scared the living daylight out of the politicians" added the delighted reader of The Age.
Posted by radical royalist at 4:37 am