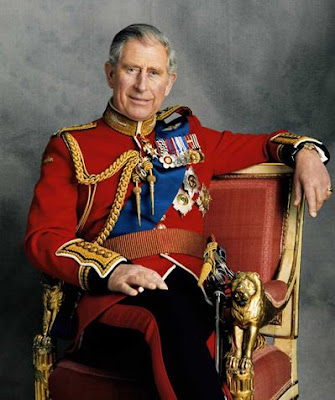 The passionate Prince
A friend in the UK was kind enough to record the documentary the BBC had broadcast on the occasion of Prince Charles’ 60th birthday on 14th November 2008: “A passionate Prince” and send me a DVD. After watching it, I can understand why no Australian TV station has broadcast it: It would demonstrate the lack of a personality like Prince Charles here in Australia. The BBC film crew could accompany The Prince of Wales for 12 months and they caught a deep insight not only into the Prince’s 25 charity organisations and how they work, but also into his thinking, his ideas, his compassionate way of seeing the world.

My only hope is that Australia will use the power that this Prince has at the age of 60 and give him the chance to set up examples of environmental friendly farming, housing and living. He should be granted a piece of land in Victoria to demonstrate his ideas down under. His concept of the restoration of natural grassland is directly relevant to Australia. Given the recently announced extensions to Melbourne that will impact massively on important native grasslands surrounding Victoria's capital.

I wonder what people like Frank Devine who accused him of having “a lot of kinky green convictions” would think had they ventured to watch the documentary. But they prefer to ignore and ridicule him. That’s easier than to start having it out with the issues Prince Charles is so engaged with.

I am glad I am one of the few in Australia who could actually watch the documentary so many commented and published their ideas about it. I had the opportunity to listen to the passions that set the Prince in course.
Posted by radical royalist at 11:20 am

Just as curiosity. Portuguese TV passed the Panorama BBC program two times, and the comments where generally: ..."wow, what a interesting personallity". It's easy to understand why Murdoch's media it is not interested to let the australians know the prince!