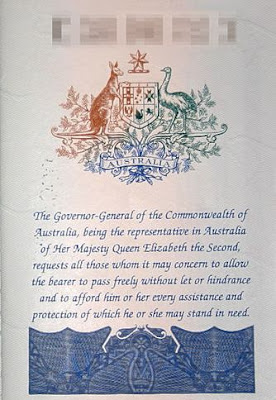 One of the republicans' main objections to the Monarchy is their claim that we don't have an “Australian head of state”. Constitutional Monarchists say that we do indeed have an “Australian head of state” – the Governor General - and that the Queen is the Australian sovereign. This definition is, of course, rejected by republicans for it would discredit their effort to abolish the Monarchy.

I on the other hand, want to point out that the Queen is not a foreigner, but an Australian. She is also Canadian, Barbadian, Jamaican, Scottish, Irish, English and even French, when one considers her status as Duke of Normandy (for the Channel Islands).

She may not have an Australian passport – in fact, I doubt that she has a passport at all, not even a British one - but she has served this country since ascending to the throne. She is as free a person, as we once were and will never be again.

The Queen embodies the time, when everybody could travel without a passport. Before World War I travellers on the Orient Express could board a train in Istanbul and get off the train in Calais to board a ship to Britain without visa and passports. A passport was a request to assist and protect the bearer of the passport. Today travel documents are become high tech instruments, but not to make travelling easier or more convenient, but to control the passport holder and restrict our free movement. The currently standardized biometrics used for the new type of passports with electronic identification systems are facial recognition, fingerprint recognition, and iris recognition. A biometric identifier held on an electronic chip gives those who can read the data total access to the stored information. Those who issue these new passports give the illusion they could prevent terrorist attacks. In fact they give total control of all our movements. Passport holders are constantly watched and monitored but for what real purpose?

Does this give the Queen a privilege she should not have? On the contrary: Her Majesty not being a passport holder is a reminder to politicians – and in fact to all of us – that we should resist electronic documents of all sorts. We should aim to get the same freedom that Her Majesty still enjoys. As I said: She embodies this freedom.

Passports don’t prove anything. Having the passport of a certain country does not mean that you are a citizen who contributes in a positive way to the society that issued the passport. It just states that the passport was issued by a certain country, how you received this little booklet is of no importance. You may have received it because your parent(s) belonged to this state, you may have been naturalised, you may have been forced to accept it, because you lost your home country and fled to the new one, giving you no choice, but to accept it. However, you may have bought your way into the country that issued the passport either by bribing officials or by promising to “invest money” in your new country. And certainly there are those who use – false – passports to achieve something they would not be able to do with another passport. Does your passport show that you render a special loyalty to the state that issued the passport? Also, this piece of paper can give no proof for that.

The Queen of Australia may not have an Australian passport, but Her loyalty towards Australia has never been in doubt. The Queen represents the type of international citizen that politicians around the world resent. 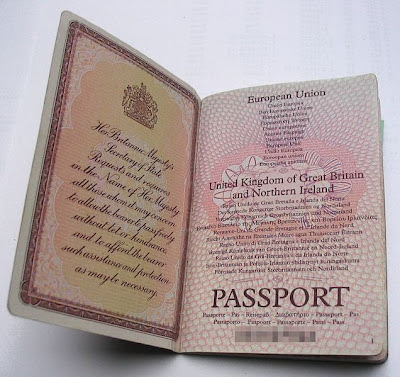 The biometric passport has an updated design since its first launch and additional security features. The updated features include pages with intricate designs, complex watermarks and a chip antenna.
Posted by radical royalist at 7:26 am