Why weren't you at Federation Square? 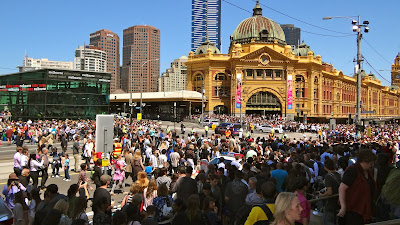 The day got off to a laid back start. I had requested leave as soon as the date of the Queen's visit was announced, so I got to make the most of the big day. I went to a 6am cycle class, and the instructor, Nicholas, looked at me in surprise and said: “Why aren’t you at Federation Square?” Indeed, after the amazing turnout in Brisbane, I did consider getting an early tram into town. But when I have seen the Queen in the past, my general rule has been to get in place about three hours ahead of her arrival. So I had an hour or two up my sleeve and enjoyed some time back at home with my French Bulldog Bert, who, as I prepared to depart again, got all excited; no doubt he wanted to meet the Queen as well. His disappointment at being left behind was somewhat soothed by a nice big treat and we separated on good terms.

I got the train to Flinders Street Station, directly opposite Federation Square, arriving just after 9:00am. Already there were large numbers of people in place, and I started to scout out a good position along the red carpet. There were no spots left at the front of the barriers, so I looked for the next best thing: directly behind a short person. I was in luck and staked my claim behind a elderly lady, who also had some flowers. She was with her granddaughter, and although I never found out for sure where she was from, I did hear comments about living in Cambodia. Next to her was a tall, solid young man, also clutching flowers, who kept mentioning that he had arrived at 5:45 am (more of him later). There was a couple who came down from Bendigo last night and another family who got an early train from Ballarat.

I settled in for the long wait and enjoyed the atmosphere. Before too long a jazz band took to the stage to provide some light entertainment. They were pretty good, and even played a coupe of my favourites; “Fly me to the moon (in other words..)” and “The girl from Ipanema”. After about an hour the crowds had grown and the pressure from behind had caused a ripple on effect. I noticed that I was gradually being nudged from behind the Cambodian lady into the shadow of the tall young chap already mentioned. I was beginning to think that I had made a bad choice, but it was too late to move now. Then I noticed that there were two Constables standing behind us, taking an interest in the tall young man. A few minutes later the Constables were joined by a couple of Sergeants. Finally a Senior Sergeant appeared, pulling on his leather gloves, just like The Freak from “Prisoner” (or “Prisoner - Cell Block H” as some of you might know it).

This did not bode well for the future, so I began shoving back against the swell of the crowd to disassociate myself from the tall young man. Sure enough, Senior Sergeant reached into the crowd and tapped him on the shoulder and asked to have a word. The tall young man was not very impressed, and unfortunately, made his feelings known. A young lady next to me was so upset that she started crying (she had earlier asked him if she could squeeze in next to him, only to be scathingly told no). Obviously it is not a good idea to yell at police if you want to keep your prime position. He did not come back. His cousin, who had joined him after I arrived, asked another Constable what was going on. The Constable said: “You know what’s going on”, and then told the couple from Bendigo that it would be a good idea not to get involved. This little drama certainly helped pass the time, and after all the shuffling around I found myself back behind my Cambodian lady, with a great view of proceedings. (The tall young man's side of the story can be read here.)

As we got into the final hour of waiting, the sense of anticipation grew. Reports arrived that the Queen had arrived at the Royal Children’s Hospital. Word went around that she was wearing “shocking pink”. The plastic covering the red carpet was rolled back, and our nostrils were assaulted with the acrid smell of cheap new carpet warming in the morning sun. But it meant that the Queen was getting closer, so nobody minded. A couple of workmen made sure the carpet joins were smooth, and got cheer for their efforts. Then the Australian Federal Police arrived and started lining up all the children with flowers and gifts. There was one little girl who was the spitting image of Crown Princess Victoria of Sweden at that age, right down to the same glasses, it was quite uncanny. Finally the band stopped and an announcement was made: "The Queen had arrived." A tremendous cheer went up, flags waved, and applause broke out. The big screen then burst into colour and we were able to watch proceedings. Yes, the rumour was right; pink. The crowd cheered again. 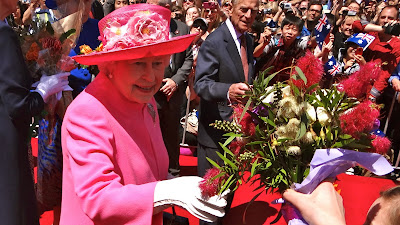 It was 12:43 and the Queen and Duke began their slow progress towards the Prince’s Bridge tram stop. There were regular calls of “three cheers for Her Majesty the Queen”, with everyone joining in with great enthusiasm. Finally, here she was right in front of me, less than a metre away. She was focussing on all the children and trying to juggle the massive amounts of flowers, flags, cards and gifts being held up to her. I last saw the Queen up close in 2006 at the Royal Exhibition Buildings, a few hours before she opened the Melbourne Commonwealth Games. No doubt about it, she has aged, and is starting to stoop a little. But when she looked up it was with the same bright eyes, and wonderful smile. The Duke was near by, keeping an eye on the Queen, as well as chatting to the crowd on the other side. He is a remarkable man. Lady Susan Hussey was head of the chain of helpers making sure the floral tributes kept on moving. 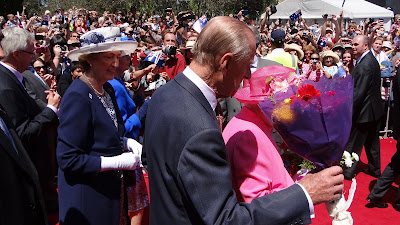 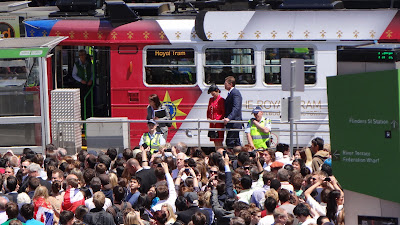 Then it was all over, and the Queen disappeared behind the cameras and officials who were bringing up the rear. But the big screen meant we could still enjoy what was happening. It was then that I turned around and noticed just how massive the crowd was. I have seen the Queen in Melbourne three times, twice in Sydney, and once in Adelaide. But nothing has come close to this massive turn out of people. I could see down to the tram stop, and across to Flinders Street Station and Prince’s Bridge. Every available vantage point was chock-a-block jam-packed with hundreds and hundreds of happy faces. The bells at St Paul’s Cathedral then started to peel, adding to the wonderful sense of occasion. I have never seen anything like it before. It was absolutely amazing. 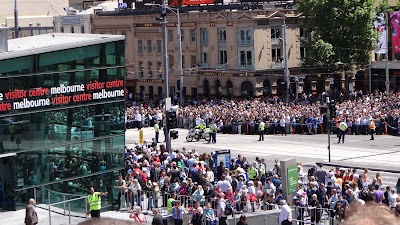 I then headed up to Government House, picking up some welcome refreshments, and settled under a shady tree to wait for the Queen’s departure. It was a lot quieter, with a couple of hundred people enjoying the gardens, sitting on the lawns, or cooling off under the large spreading trees. A security guard announced that the Queen was running late and would not depart until 2:40. This was good news. I was beat, and could happily have spent the rest of the afternoon under the tree. Before long the Governor of Victoria departed for the airport to be in place for the formal goodbyes. I dragged myself out from under my tree and got ready for another glimpse of the Queen. I was in the same spot where I stood in 1985 for the arrival of the Prince and Princess of Wales, the first time I saw a members of the Royal Family. The Royal Range Rover soon came into sight and a cheer went up. Just over four hours after her arrival, the Queen departed.

I made my way home, tired and very badly sun-burnt. It was only about 20 degrees, but with hardly a cloud in the sky my poor old bald head got a roasting. I’ve just watched the news and one estimation is that nearly 100,000 people lined the streets today. Let’s see if Perth can top that!

Posted by radical royalist at 7:54 am

I just discovered your blog and LOVED this post! Hearing someone else’s account of going to see the Queen was wonderful. :) I, too, was in Melbourne that day (the atmosphere created by those church bells was really something to remember!), and saw the Queen and the Duke as they passed by in the royal tram. The Queen looked absolutely stunning in that pink.

I’m glad someone picked up on how remarkable the Duke of Edinburgh is. He and the Queen have such an incredible relationship, and that picture where the two of them are so close together is heartwarming. After all these years! :) http://www.itnsource.com/shotlist//BHC_RTV/1947/11/27/BGU410270116/

God Save Our Queen – long may she reign!