The Queen and her Australian representative 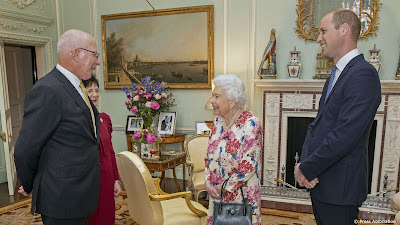 Queen Elizabeth II, The Queen of Australia, held an audience with The Governor-General designate of Australia, General the Honourable David Hurley today at Buckingham Palace. The Duke of Cambridge and Mrs Hurley were also present.

The Governor-General designate of Australia , General David John Hurley, AC, DSC, FTSE (born 26th August, 1953) is a former senior officer in the Australian Army and was the 38th Governor of New South Wales from 2014 to 2019. Assuming office on 28th June, 2019.
Posted by radical royalist at 10:56 pm No comments: Links to this post