70th Birthday of the King of the Hellenes

Today His Majesty King Constantine II of the Hellenes Κωνσταντίνος, Βασιλεύς των Ελλήνων celebrates his 70th birthday. That this important landmark in his life cannot be celebrated with joy and festivities at home has nothing to do with the Greek financial crisis that cripples the country. The King has been living in exile since the counter-coup to re-establish democracy in Greece, failed that fatal night of 13th December 1967.

The Mad Monarchist stated quite bluntly that “the ruling regime is so hostile to the former royal family and the royals so increasingly removed from the country that it can seem like a lost cause more along the lines of the plight of the Dalai Lama than even the King of Romania in terms of the likelihood of the success of a restoration. However, the Greek monarchists deserve a great deal of credit for fighting the good fight far more frequently and for greater durations than most other monarchists, especially in modern times. It is also important to note that when modern Greece won its independence from the Turks in 1829 it originally went back to the classical period which is so idealized and founded a republic. Monarchists should be quick to point out that this republic did not last long because it proved totally incapable and so a monarchy was established.”

When Prince Constantine of Greece and Denmark was born on 2nd June 1940 to Crown Prince Paul and Crown Princess Frederika (née Prinzessin Friederike von Hannover, Herzogin zu Braunschweig und Lüneburg) Europe was at war. On 28th October the same year the Duce decided to attack the Kingdom of Greece, but the defiant Greeks were able to claim the first great victory that the Allied forces had won against the Axis powers since the beginning of the war. It increased the prestige of King George II of Greece, Crown Prince Paul's brother, who was very active in monitoring the progress of the military campaign against Italy. The Italian troops were driven out of Greece, and the Royal Greek army entered Albania, that had also fallen victim to Italian expansion plans. German dictator Adolf Hitler came to his allies rescue and on 6th April 1941 German troops attacked the Royal Greek Army.

After several weeks of intense fighting, the Greek armed forces were defeated and German troops occupied Athens on 27th April. At that time the King was determined to continue the resistance. He formed a government under Emmanouel Tsouderos (a former opponent of the King’s), who also happened to be from the island of Crete - the place of the latest epic battle between the Greeks and the Germans. On 23rd April King George , Crown Prince Paul, Queen Frederika and their children, Princess Sophia and Prince Constantine and the royal government were evacuate to Crete.

The German invasion of Crete began on 20th May 1941 and by 1st June the last Allied troops had surrendered. King George II, Crown Prince Paul and the Royal Greek government were first evacuated to Egypt, and later went to the United Kingdom to continue their fight for the liberation of Greece. Crown Princess Frederika and her children went to South Africa, where in 1942 the couple's third child, Princess Irene, was born. 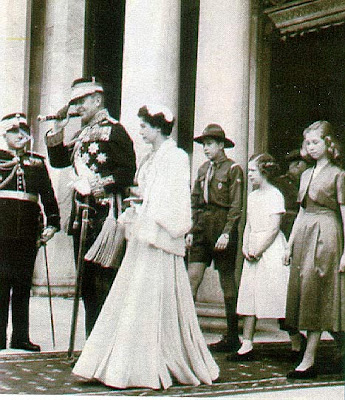 After the German defeat the Monarchy was re-affirmed in a referendum in 1946. In the midst of a bloody civil war, King George II died and was succeeded by his brother, who ascended the Greek throne as King Pavlos I. Now Crown Prince Constantine went to the Anavryta School in Athens; graduated of three military academies; was inscribed in the 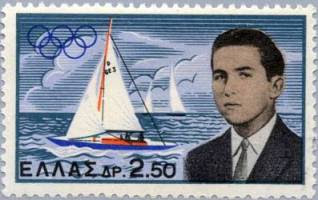 Faculty of Law at the University of Athens; and underwent postgraduate studies in modern European History at Cambridge University. At the Games of the XVII Olympiad in Rome Crown Prince Constantine won an Olympic Gold Medal in 1960 for yachting, becoming the first Greek to do so since 1912.

On 6th March 1964 King Paul died, and his son ascended to the throne as King Constantine II. The US magazine Time illustrated his proclamation:

Last week, as high government officials, the hierarchy of the Greek church, leading judges and Members of Parliament gathered solemnly for a candlelight ceremony at the royal palace, new King Constantine kissed a silver-bound Bible, then took the royal oath. "I succeed my father to the throne with the firm determination to follow his lofty example," Constantine declared. "I pledge to serve my country with wholehearted devotion, and all my powers as a vigilant guardian of the free institutions of the democratic regime. My only thoughts and cares will always be the true and supreme interest of our fatherland." When the vows had been spoken, Premier George Papandreou shouted "Long live the King!" and the assemblage echoed the words. At 23 the world's youngest monarch, Constantine will be tutored in statecraft by the foxy Papandreou,* 76, whose Center Union coalition won a landslide victory over Karamanlis' Conservatives last month. A tall, athletic youth who won an Olympic gold medal in 1960, Constantine can rely for some time on sympathy for his father and the good feeling engendered by his impending marriage next January to Denmark's Princess Anne-Marie to facilitate his task. But ultimately Constantine can calm Greece's latent antimonarchist feelings only by calling, like his father, on the motto of his royal house: "My power is the love of my people."

* Whose own son Andreas, 45, gave up U.S. citizenship and a University of California post as an economics professor to run for election and join his father's Cabinet as chief aide to the Premier.

The following years were full of unrest and unstable governments. For a good account of this period see Wikipedia.

From the outset, the relationship between King Constantine II and the colonels was an uneasy one. The colonels were not willing to share power with anyone whereas the 25-year old King, like his father before him, was used to playing an active role in politics and would never consent to being a mere figurehead, especially in a military administration.

The King finally decided to launch his counter-coup on 13th December 1967. Since Athens was effectively in the hands of the junta militarily, Constantine decided to fly to the small northern city of Kavala, East of Thessaloniki. There he hoped to be among troops loyal only to him.

The vague plan he and his advisers had conceived was to form a unit that would advance to Thessaloniki (Greece's second biggest city and unofficial capital of northern Greece) and take it. Constantine planned to install an alternative administration there. International recognition, which he believed would be given, as well as internal pressure from the fact that Greece would have been split in two governments would, as the King hoped, force the junta to resign, leaving the field clear for him to return triumphant to Athens.

In the early morning hours of 13th December the King boarded the royal plane together with Queen Anne-Marie of Greece, their two baby children, Princess Alexia of Greece and Denmark and Pavlos, Crown Prince of Greece, his mother [Queen] Friederike and his sister, Princess Irene of Greece and Denmark. Constantine also took Premier Kollias with him. At first things seemed to be going according to plan. Constantine was well received in Kavala which, militarily, was under the command of a general loyal to him. The air force and navy, both strongly royalist and almost not involved in the 1967 coup, immediately mobilized. Another of Constantine's generals effectively cut all communication between Athens and the north.

Two referenda, the first under the military junta’s rule in 1973 and another one in 1974 did not bring back the Monarchy. The Greek Royal Family left Rome in 1973 and took residence in the United Kingdom.

King Constantine suffered another blow in 1994, when the Greek parliament, the very same parliament that is directly responsible for Greece's current debt crisis, passed a law to expropriate his property and revoke his citizenship. To this day, he refuses to accept being told that he is not Greek. 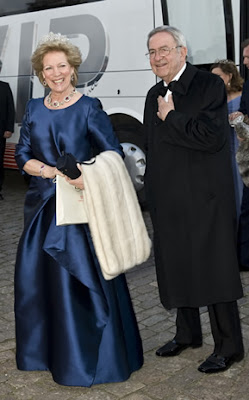 One of the most recent photos: On 16th April 2010 the King and Queen of the Hellenes attended H.M. Queen Margrethe of Denmark's 70 birthday anniversary at the Palace of Fredensborg.
Posted by radical royalist at 7:02 am