35th Anniversary of another Greek Referendum
It seems, nothing has changed in Greece. DW published this news item on 7th December 2009:


Greece has seen another day of violent clashes that erupted over last year's police shooting of the 15-year-old teenager Alexis Grigoropoulos.

Greek riot police clashed with hundreds of stone-throwing youths in Athens on Monday as protesters took to the streets for a second day.

Security forces made 21 arrests after scores of stone-throwing youths separated from the throng of 5,000 demonstrators marching towards parliament.

Two youths were arrested earlier on Monday for throwing stones at a police station in Athens. Two other police stations in the suburbs of Agia Paraskevi and Kallithea were also attacked, police said.

In the northern city of Thessaloniki police fired teargas at dozens of violent youths, who broke away from a march of 2,500 people.

"The clashes are not significant overall, the protests went as expected," said a police official who declined to be named.


Today’s news from Greece is as disturbing as it was 35 years ago, when just another Greek referendum on the country’s Monarchy took place. Barely 18 months after the military dictators had forced the Greek people to sanction their decision to proclaim a republic, the Greeks were asked to go to the polls again.

The weekly magazine “To the Point International” covered the referendum:

“In spite of the low turn-out, the monarchy referendum brought all the Greek passions back into the political arena. The campaign was more lively than the general election. A few days before the vote, six policemen were slightly hurt, when a group of Maoists attacked a royalist headquarters …” 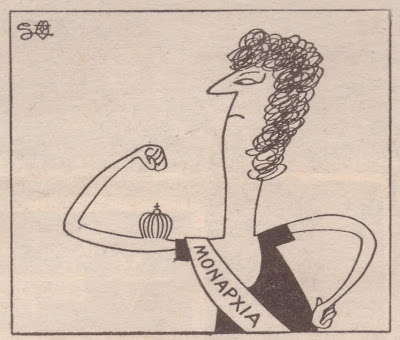 
“When the first result came in and were displayed in the press centre the international and Greek journalists were hit by a shock: A village on the Peloponnese had voted with a two thirds majority for the King. But all following results demonstrated quickly that there would be a hefty defeat for the King.”

Naturally Monarchists were disappointed by the result. In a declaration King Constantine said: “I have lost. I wish that the result of the referendum may be good for our country.” Even while in exile he served his country. For example, he was to play a leading and perhaps crucial role on the International Olympic Committee in the award of the 2004 Olympics to Athens.

He had been in exile since December 1967 and unlike other Greeks who had been forced by the dictatorship to live abroad, the Greek Royal Family was not allowed to return, when the regime collapsed. The referendum campaign took place without the main person, although it is unlikely that the King would have been like a political campaigner attending meetings and shouted slogans. 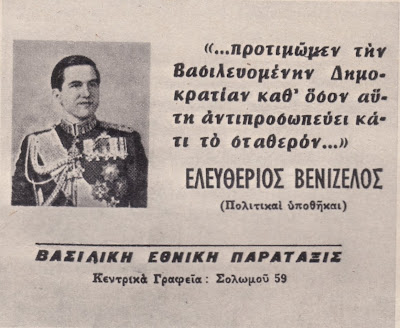 Instead, on 26th November 1974 he sent his people a message expressing his admiration for their fight and their sacrifices during the time of the dictatorship. “As you all know, I was forced to leave the country after my effort to liberate Greece from the dictatorship.”

In the British television programme, "Constantine: A King's Story", a Greek Orthodox priest explained that Constantine will always be King. Unlike many modern Monarchs, but as with Queen Elizabeth II, the King was anointed at his coronation, as were the Kings of the Old Testament. Although he accepts the referendum, The King has not abdicated. 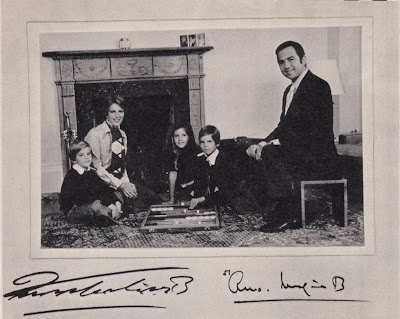 The acclaimed six part TV series “A Royal Family” finished with this remarkable sentence: “Some countries have lost their Monarchy, yet, they still have a Royal Family.” That is certainly true for Greece. 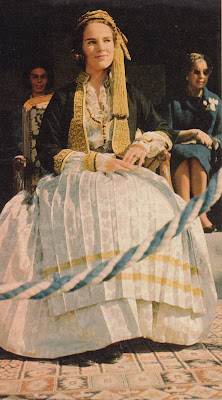 Queen Anne-Marie in a costume that was designed by the first Queen of modern Greece, Queen Amalia.
Posted by radical royalist at 12:00 am

If there is one thing I admire in any leader it is grand vision. The modern Greek monarchy, both the original and the current royal line, have displayed that. Even if it never happened they gave Greece the vision of greatness; of the glories of Byzantium reborn. Ever since the overthrow of the King the ruling elites have kept the country small, relatively poor, bickering and largely forgotten by the wider world. That is sad and I will never understand how so many can prefer republican pettiness to monarchial grandeur.

Lament of The Faithful