On the occasion of the Greek Monarch's 70th birthday, Taki's Magazine found the most charming words on the King of the Hellenes.

The Greek royal family had to endure endless vilifications while political hacks led the nation to the ruin of today. Greek politicians fear the King and they fear monarchy even more. Presidents can be appointed and expected to pay back, Kings are not and do not. ...

And it gets worse. Vilification aside, the Greek royal family’s lands were confiscated—lands that had been bought by the family in the early 19th century and not handed to them by a grateful nation - and after judicial review in the highest court of Europe, appraised at one hundredth of their value. The Greek King gave the funds to a Greek charity and has never complained. The fact that the Greek King and his family have always acted impeccably when the nation has been in danger does not seem to matter. Envy is a Greek trait, and the envious among them cheered at the unfairness of it all. Basically, the Greek left never forgave the present King’s father and mother for fighting against the communist guerrillas who tried to take power through force of arms back in the Forties. Greek journalists are, like everywhere, men and women of the left. Punto basta, as they say in the land of pasta.

Which brings me to the present. The King is now planning to move to Greece and last week he celebrated his 70th birthday. His son, Prince Pavlos and his wife, Princess Marie-Chantal, threw a wonderful dinner to celebrate it. ...

Who else was there? I’ve already done all the name dropping I will ever do, but it’s not every day that a King turns 70 and does it in such style. Bob and Chantal Miller, the Carringtons, the Bismarcks, the Frosts, the Hoares, many Greeks, and little ole me. Afterwards I had a drink with Prince Nikolaos of Greece and as I walked back home I thought what a sign of affection for the Greek King Queen Elizabeth and the rest of the royals showed towards a very nice man who has always deserved better. Oh yes, I almost forgot. I did not see who dropped coffee on the Queen’s dress, but I sure have my suspicions. 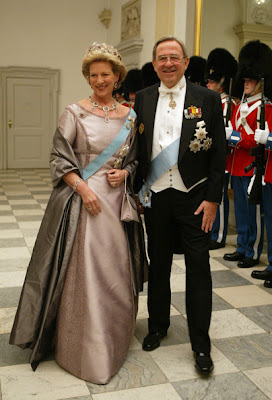 Their Majesties attended the Danish Queen's 70th birthday on 13th April 2010 at Christiansborg Palace.
Posted by radical royalist at 8:45 am

Quite a lovely tribute, indeed.