On the occasion of Prince Charles’ 60th birthday The Australian Monarchist League (AML) presented him 60 tree ferns, that were delivered to his Highgrove estate in March 2009 for planting. Highgrove, a few kilometres outside Tetbury in Gloucestershire, attracts 23,000 visitors a year and boasts a three-year waiting list. So for all those who are curious about the estate but thwarted by the waiting list, he decided to create a store open to everyone, selling estate produce and other things he quite liked, where all the profits would go to his charities.

As reported in November 2008, the Australian Monarchists’ gift are Dicksonia Antarctica, known as the Soft Tree Fern, Man Fern or Tasmanian Tree Fern is an evergreen tree fern native to parts of Australia, namely Tasmania, New South Wales and Victoria.

In its June Liberty Newsletter the AML could render an account on the tree ferns:

THE PRINCE OF WALES FERNS
We have heard from Highgrove. The ferns we gifted to HRH The Prince of Wales for his 60th birthday did very well last year and we are advised that they have made such an impact on the garden that they have inspired His Royal Highness to develop the “Southern Hemisphere Garden” later this year. 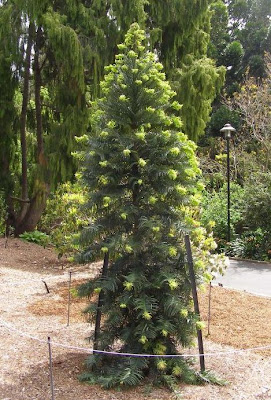 The Wollemi Pine was discovered in 1994 and there are only about 40 of them in the wild (some accounts say 80 adult pine). Up to its discovery it was known only from fossils records and it was thought to have become extinct 65 million years ago.
Posted by radical royalist at 2:16 am