The RadicalRoyalist had expressed his satisfaction with New Zealand's 2010 New Year’s honours list.

Last Wednesday New Zealand's "first lord of film" as The New Zealand Herald called him, was invested as a knight by the Queen's representative Governor-General Sir Anand Satyanand. Sir Peter said, he accepted the honour on behalf of "thousands of people". He collected a raft of Oscars for The Lord of the Rings trilogy in 2004, but had issued a statement saying the knighthood was an "incredible moment" that was greater than receiving an Oscar. 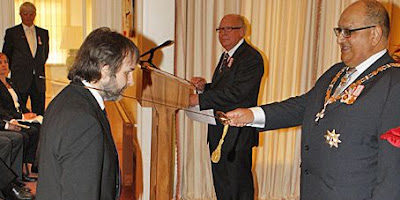 Sir Peter Jackson, along with 13 other New Zealanders involved in the arts, health, scientific and public sectors, was honoured at an investiture at Premier House.

It was wonderful New Zealand was honouring the arts industry, he said.

Watch the video of Sir Peter being knighted:

Posted by radical royalist at 8:40 am

Knighthoods- I wish we still had them here you know