The republican media had a hard week. They were obliged to report on Prince William’s unofficial visit to Australia – and its obvious success -, but then they had to find means to degrade and minimize it.

Today’s editorial of The Age is a good example. Under the headline Goodbye, sweet prince. Hello, republic debate it repeated its well-known phrases. “He left these shores yesterday morning, having earned a good amount of respect and, indeed, affection - qualities he obviously feels in return about Australia. … The Age has long believed that a crucial defining point in Australia's nationhood is the inevitable severing of vestigial ties with the British monarchy.”

The Age even dug up old Turnbull from his retirement mansion, from where he wrote an article for Murdoch’s London newspaper The Times, stating 'that Prince William, for all his charms, will make as much difference to the republic debate as a rapturous welcome in the United States 'would indicate that the Americans are having second thoughts about 1776'".

Well, I don’t want to disappoint the editorialist, but would he do some research s/he would find quite a lot of US Monarchists who do have second thoughts about 1776. After all, nearly a third of those who read the RadicalRoyalist's blog are based in the USA. Need some help in getting in contact with them, dear Age?

The Age's arch-republican writer Michelle Grattan also read Murdoch’s London Times and was obviously delighted to find recycled Malcolm Turnbull phrases, Prince 'no obstacle to republic': "Prince William might be as charming a King as he was a Prince but could never represent Australia in the way he would represent his own country, Malcolm Turnbull has told a British audience. … Mr Turnbull, who headed the Australian Republican Movement when the [from the republican point of view, RR] unsuccessful referendum was held in 1999, maintains his opposition to a directly elected president, favouring a president being chosen by a bipartisan parliamentary vote.”

The Age’s editorial on Prince William's departure day came across as a very grumpy piece of work. Well, could we really expect any graciousness? The Age admitted: “In personal and public relations terms, and in the eyes of many Australians whose lives he briefly touched, Prince William's whirlwind visit to Sydney and Melbourne this week has been a huge success. … He showed himself to be equally comfortable in a pub or on a military firing range as when talking with victims of disastrous bushfires. In another era, not so long ago, he would have generally been hailed by Australians as a Prince for all seasons, a thoroughly satisfactory future King.”

But this editorial points the finger at the republican kerfuffle: “More serious recent setbacks to republicanism have been the byproducts of federal politics. The latest was the overthrow of Malcolm Turnbull, former leader of the republican movement, as leader of the Opposition. His replacement, Tony Abbott, has been a monarchist.” So, it was an overthrow of a failed Leader of Her Majesty’s Australian Opposition. Did he not fall by his own mistakes? He was replaced in a democratic election and not in an overthrow.

And getting rather nostalgic, The Age states in the same editorial: “For a bloke who keeps talking about the need for 'revolutions', Rudd is remarkably coy about upsetting the status quo. But all is not lost. … A massed chorus of government spinners immediately sought to howl down such a possibility. We hope that [federal Attorney-General, Robert] McClelland, the point minister, is right and that a republic referendum is still very much a live option - and not too far down the track. It certainly should be.”

However, The Age, like all republicans, never admit, what they will do, should the Monarchists win the referendum again. They never contemplate defeat. That's not in their Weltanschauung. But if it should happen again, will they finally accept a democratic decision and live within the framework of a Constitutional Monarchy? Or will they continue to work on the overthrow of the Monarchy - no matter, what the people decided?

The Age’s other renowned arch-republican writer Michael Shmith searched the British media for their reaction of Prince William’s tour down under. “For all the efforts of myriad royal reporters, whose life's work is to serve as humble scribes to those with kind hearts and coronets, the fate of the William roadshow came down to the words on top of their peerless prose.” He was not impressed by The Daily Telegraph’s headline:

“'Prince William thanks Australians for their show of affection’. How nice and precise. The Sun: 'Wills has made Oz love Royals again'. This was accompanied by a short appreciation by that well-known constitutional authority, star of soap and pantomime, Jason Donovan, who says, 'What Prince William does bring is a clean slate … [he] can reinvigorate and re-invent the royal family for Australians.'” Certainly, Michael Shmith is a far greater well-known constitutional authority than Jason Donovan. But who is better known outside the republican circles? And this silly me thought everybody should have a say in the Monarchy vs. republic discussion. It seems, only republican artists are welcome to express their opinion.

Where are the letters to the editor?
In the letters to the editor section there was still no great rush to push the republican agenda. Today's Age has two meager two-sentence-statements that don't even appear online. The pro-Monarchy one was written by someone who lives in Victoria -, the other one opposing Prince William was - once again - sent in by a NSW resident, like the one and only letter on Prince William's visit that was published two days ago. Where are all the Victorian republicans?

The RadicalRoyalist is getting ready for The Sunday Age. Considering the paper's pushy republicanism, the poor subscribers will face the opinion of a well-known constitutional authority like, well, let's say, Guy Rundle, who can always be expected to promote "a" republic for Australia. How good of him. Since he has been living in the United Kingdom for some time, he really knows exactly, what is going on in Australia and what is good for us. 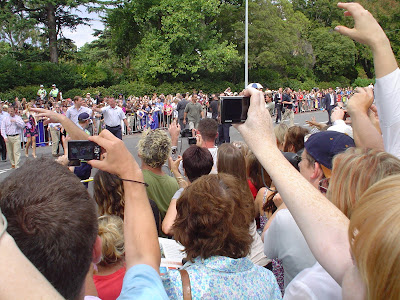 So, nobody is interested, huh?
Posted by radical royalist at 1:46 am