The Queen is worth more than many people thought

It set a new sales record for the late Footscray-born portrait painter. 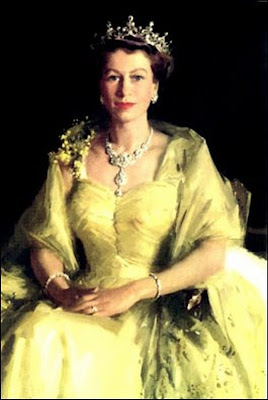 Showing the Queen of Australia in her “wattle” dress, it became the subject of colour photographs distributed widely in federal, state and local government departments, schools, hospitals, libraries, church halls and RSL clubs throughout the country.

For many immigrants it was their first encounter with Australian art as the masterpiece was reproduced on their Australian naturalization papers, and a print of the portrait was generally present when they took the Oath of Allegiance.

It had been commissioned by Melbourne industrialist James Beveridge for presentation to the Commonwealth Government to commemorate the Queen’s first encounter with Her Australian people.

The Queen, who had arrived in Sydney on 3rd February 1954, had worn the wattle gown to her first evening engagement in Sydney, and again to her last evening function in Perth.

Sir William Dargie painted more than one portrait to ensure one made it safely to Australia. The other, on offer at the Bonhams' auction, was presented to Sir Neil and Lady Hamilton Fairley with whom he stayed while in London. Another one was commissioned in 1975 for the Portrait Gallery of Sir Leon and Lady Trout. The same portrait was also produced for the government of New Zealand.

Coloured prints are still advertised, as available today, through The Australian Monarchist League.
Posted by radical royalist at 6:43 am

It seems an excellent portrait to me. There is a great sense of the strength of the Queen displayed in the eyes. That's what stands out the most to me anyway. Very regal and Majestic, fitting I would think for a country with tough, frontier traditional roots.

I think it is a beautiful portrait.