Portuguese President demands more money despite cuts for everybody else

Ignored by the international media, a scandal has erupted in Portugal caused by the stubborn greed of Anibal Cavaco Silva, the Portuguese republic’s president. He had chosen the first anniversary of his re-election to complain about his impoverished living conditions.

While the debt crisis hit Portugal hard, the country’s governments (a Socialist one until 5th June 2011, after the its election defeat a coalition of Social Democrats [PDS] and Christian Democrats [CDS-PP]) are taking tough austerity measures to minimize the budget deficit. Amongst other measures the Socialist government decided that public servants cannot receive a salary and a pension at the same time. Under the new law Mr. Cavaco Silva renounced his presidential salary of €6523.93. As a former bank manager and university professor he is already entitled to a pension of €10,042.00 a month. On the anniversary of his election he complained that he cannot have a decent life with just €141,000 a year, in his case there is no scrapping of the 13th and 14th monthly holiday and Christmas payments. 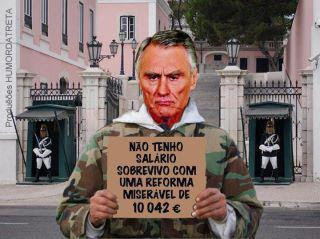 A new member of the Occupy Movement: Anibal Cavaco Silva can't live on €10,042 a month.

His public outburst into a TV camera was not well received since the average Portuguese pensioner who lives on €600 a month and does no longer benefit from the once usual 13th and 14th payment. Price hikes on public transport, salary cuts for public servants and other austerity measures do not bother Mr. Cavaco Silva: He insists on a proper pension for himself and his wife, otherwise he would not be able to keep his standard of living.

The outrage is widespread and internet activists not only call for his resignation (Sr. Professor Cavaco, demita-se), but petitions can be signed to force Mr. Cavaco Silva out of office. Petição Pedido de Demissão do Presidente da República . Protesters gathered outside Portugal’s presidential palace to donate money and food to the head of state.

Not speaking about the SEVENTEEN MILLION Euro paid to the Presidential House (500 servants...) every year and all the money that we spend with the 3 ex-Presidents (office, car, chauffeur, pocket-money, honorific positions well paid and normally higher than the presidential salary, etc, etc). When we think that the Spanish, with an economy six times bigger than our pay less than 50% than what we transfer to Belém Palace, makes me ask: are we mad?

Of course the institution and it's real value can not be valued just for the expenses and it's not risky to say that even about this matter, the Spanish are in far better position. Really!