Big surprise no 2: The article is not only fair to the Monarch in exile, but refers also to his increasing popularity in his home country:

"Farouk fever" has been sweeping Egypt. A TV soap opera on King Farouk was such a hit its producers just unveiled another series about the royals. Books set in the era are selling briskly at the popular Diwan bookstore chain in Cairo. A tour company is marketing cruises along the Nile on a yacht with a "Farouk Suite."

"You are and you left as the king," says Youssef Makar, a friend who is seated nearby. "And to us you will always be the king."

In July 1952, the young Fouad, swaddled in fine Egyptian embroidered cotton, boarded the royal yacht with his parents and three half sisters as they fled the country during the revolution. He was in the arms of his nanny, and Farouk ordered them to walk in front of him. "He is the King," Farouk declared. They landed in Capri and Fouad, carried by his nanny, was the first off the boat. 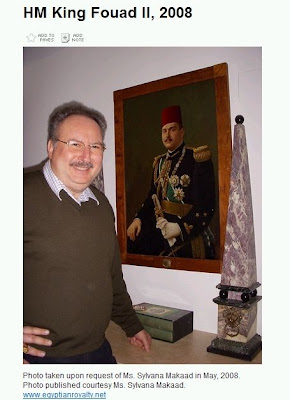 His father's "comeback" has given Fouad a new optimism. He longs to return to Egypt in some capacity—perhaps as cultural ambassador. Monarchs such as the King of Spain, Juan Carlos, have helped their countries move to democracy, he says: "It works for Spain beautifully."

Posted by radical royalist at 1:05 pm