The Queen has hailed the work of her Armed Forces

RAF Tucano aircraft form the number '60' to mark the number of years the Queen has spent on the throne.

At a Diamond Jubilee parade of more than 2,500 men and women from the military Her Majesty Queen Elizabeth II expressed her appreciation.

"Chief of the Defence Staff;


I very much appreciate your kind words. It is a tradition of very long standing that the Sovereign, and members of the Royal Family, are intimately associated with the Armed Forces and have been proud to serve in all three services.

In addition we have special connections with particular commands of the Royal Navy and Royal Marines; Corps and Regiments of the Army, and Air Stations of the Royal Air Force. We greatly value these connections as it means we meet the wider family of wives and husbands of the currently serving men and women of the Armed Forces.

We are very proud of the selfless service, and sacrifices made by servicemen and women and their families in recent years. It is very gratifying to celebrate and take pride in successful achievements, but the real test of character is the ability to maintain morale and a positive spirit in bad times as well as when things are going well.

It is a great pleasure to see representatives of the three Armed Services here today, and it also gives me the opportunity to send greetings and best wishes to their families and friends, and to all those members of the Armed Services who cannot be here today." 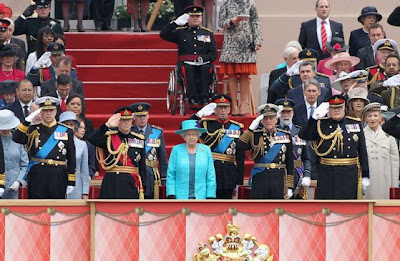 When 2,500 men and women from all three services marched, they were not merely saluting their sovereign but celebrating their own. As The Daily Telegraph noticed: The Armed Fordes celebrations were "with no politicians or celebrities daring to crash the event". However, foreign Monarchs were present. One could spot among others Queen Margrethe II of Denmark and her husband, Prince Henrik, King Carl XVI Gustaf and Queen Silvia of Sweden, King Harald V of Norway, King Michael I of Romania and King Simeon II of the Bulgarians. 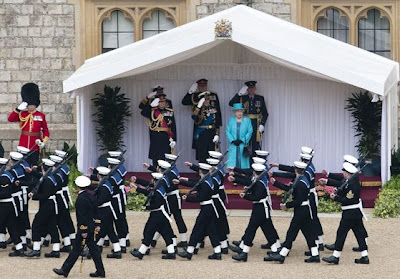 The Chief of the Defence Staff, Sir David Richards, praised The Queen's 60 years as sovereign: "Her Majesty's support and encouragement over the years has created a very special bond between the monarch and her forces. That link is felt by all those who have the privilege to wear Her Majesty's uniform." 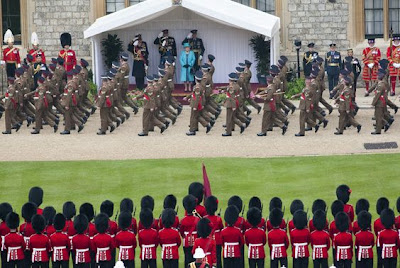 Posted by radical royalist at 12:48 pm