Greek Crown Prince comments on the political crisis in his country 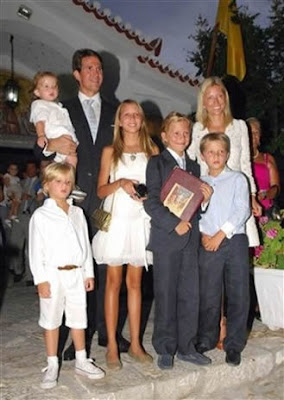 In an article published in The Periscope Post His Royal Highness Crown Prince Pavlos of Greece commented his country's political deadlock after the elections of 6th May.


Greece has always had a strong-minded population that liked to work hard and was proud of its history. Sadly we do not have too much to be proud of at the moment. This was the chance to get some change and new blood in to the government, but unfortunately the extremist mentality of some of the parties will make it near on impossible to structure a viable coalition. A second election has a good chance of keeping the traditional duopoly intact but with hopefully a reasonable third party for balance. We may even see an outright victory, which would be good because we need stability more than anything else right now.

The lesson to be learnt here is that most of the party leaders gave everything for a chance at the PM position – but did so without a real appreciation of the country’s and its citizens’ needs. I hope that we will see some leadership with responsibility towards Greece, all members of the population and, of course, our place in Europe. Long term corruption and tax evasion has brought Greece to her knees. All this led to the vote – or lack of vote – on Sunday by Greek citizens that made it look like an attempt for defection, but in actual fact it’s simply a vote of no confidence in past leadership. The future leaders need to work for the country first and then their personal glory. The people have spoken and the politicians need to listen. We have the ability to work together so let’s put our misgivings and pride aside and let’s get Hellas back on track.


Crown Prince Pavlos will soon be launching a regular discussion forum hosted on The Periscope Post, engaging selected participants and Periscope readers in conversations about current social and economic topics.
Posted by radical royalist at 1:56 pm