The King of Tonga received by the Pope 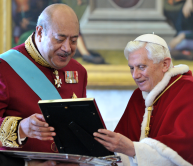 The cordial discussions dwelt on various aspects of the country's social and economic life, as well as on the positive contribution the Catholic Church makes in various sectors of society, and her activities of human promotion. There followed an exchange of opinions on the international situation, with particular reference to the Pacific island States.

Posted by radical royalist at 11:36 am