As the RadicalRoyalist wrote on 21st January and 7th January 2012 German president Christian Wulff has been in trouble since mid-December 2011. This Friday he finally announced his resignation just hours after the prosecutor’s office in Hanover announced that it had asked for the German head of state’s immunity from prosecution to be removed, so that it could open a criminal investigation into allegations that Wulff had improperly granted or accepted favours from businessmen. 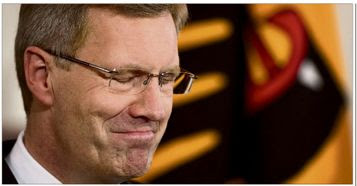 The latest scandal involves media allegations that film producer David Groenewold paid for a vacation Wulff spent on the island of Sylt as well as a short break in Munich during Oktoberfest in 2007. A year earlier, Lower Saxony, which Wulff led as state premier at the time, had approved a four-million-euro credit guarantee for one of Groenewold's projects.

In his resignation announcement Wulff was honest and said he enjoyed being president, but that Germany needed someone in the job who large swathes of society trusted. As president Wulff received an annual payment of approximately €213,000 and he can expect to receive the annual salary for the rest of his life. The German taxpayer will also finance an office plus staff and a chauffeur-driven car (certainly not a VW Beetle). Today Germany pays for five "retired" presidents, one since he left office in 1979.

The alternative to any German president is presented here.
Posted by radical royalist at 11:27 am