While the world’s attention today focusses on the civil war in Libya, the Kingdom of Morocco commemorates the 50th anniversary of the passing away of the “pater patriae”, the father of the fatherland, His Majesty King Mohammed V. 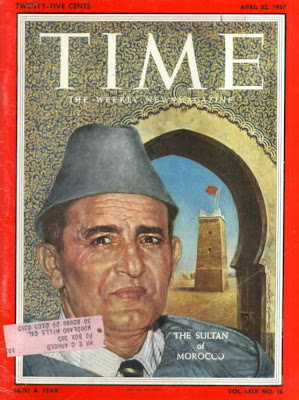 A well documented biography can be found here.
Sidi Mohammed Ben Youssef was only the third son of Moulay Youssef, the brother of the ruling sultan, Moulay Hafid. But in 1912, when the French occupied Morocco, Moulay Youssef replaced his brother as sultan. Sidi Mohammed Ben Youssef grew up in the royal palaces of Fez and Meknes, where an Algerian teacher tutored him.

On 18th November 1927, at the age of 16 Sidi Mohammed was chosen by the college of ulemas (religious scholars) to succeed his father. This choice was influenced by the French protectorate authorities, who hoped that this timid and docile youth would remain removed from the affairs of state. Isolated in his palace, Sultan Mohammed V, during the initial years of his reign, seemed to accept his unimportant role. During this same period the first nationalists organized a movement which led to the formation of the Istiqlal, or Independence party, in 1944. Already by the late 1930s the Sultan (who assumed the title of king in 1956) had secretly collaborated with some of these nationalists.

During World War II, however, Sultan Mohammed remained loyal to France, but in January 1943 at the Conference of Anfa, a suburb of Casablanca, the Sultan dined with U.S. president Franklin Roosevelt, who opened up the perspective of an independent Morocco if the Sultan would aid the Allies in recruiting Moroccan troops for action on the European front. In 1947, during a speech at Tangiers, Mohammed Ben Youssef departed from the written text which the French authorities had approved and openly sided with the nationalist cause.

The crisis in Franco-Moroccan relations intensified after the war. It was aggravated by the attitude of conservative resident generals who repressed the nationalist party. Stripped of real power, Mohammed V was often forced to condemn the Istiqlal officially while secretly he encouraged its leaders. Beginning in 1947 the situation deteriorated. Encouraged, even pushed, by the preponderant colonialist groups, the French authorities in Rabat tightened their direct control over the administration, an act which further diminished the Sultan's authority. The latter resisted by the only legal means at his disposal and refused as often as he could to countersign laws and decrees. He also attempted to bring the growing abuse of his powers to the attention of the French government, but all of his attempts to change the protectorate status failed.

Deposition and Exile
Tension mounted in Morocco during the 1950s. As the French in Morocco attacked the Sultan, his popularity grew. The French, allied with an important feudal chief of the south, the Glaoui of Marrakesh, and other traditionalist leaders hostile to the reformist and nationalistic elites of the Istiqlal, tried to play off one side against the other. Riots in Casablanca at the end of 1952 ushered in the era of mass politics, and the Sultan was accused of being one of the main causes for the deteriorating situation. By 20th August 1953, despite the opposition of Paris, the French in Morocco deposed the Sultan, who refused to abdicate his throne. He and his family were exiled to Madagascar, where they remained for three years. 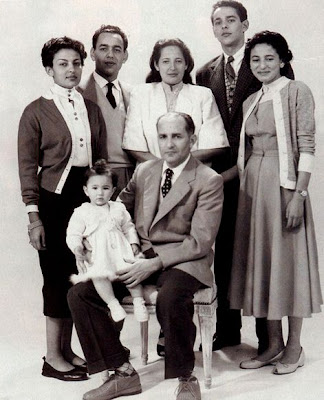 April 1954 : Mohammed V is in exile on Madagascar. The Sultan poses with his children. From left to right: Aïcha, Hassan (the futur King Hassan II), Malika, Abdellah, and Nezha. On the sultan's knees: The youngest princess, Amina, who was born in exile.

In Morocco the failure of the royal deposition became quickly clear. The Moroccans considered the new puppet sultan, Moulay Arafa, a usurper. Acts of terrorism multiplied, and insecurity spread throughout the country. The French in Morocco retaliated with repression and violence, while liberal politicians in Paris actively worked for a solution. When the Glaoui rallied to the cause of Mohammed V, all opposition to the exile's return melted away, and on 16th November 1955, the Sultan regained Morocco and was greeted by delirious crowds. On 2nd March 1956, Morocco received its independence. Mohammed V became the chief of state, and his son Moulay Hassan took command of the army.

Independent King
When Morocco became independent, Mohammed V was 45 years old. He had two sons and four daughters, all of whom had received a modern education. His poor health gave him a fragile appearance, accentuated by a natural pallor. But his gaze was attentive, and he possessed an ironic sense of humour that he revealed to friends and relatives. The early rigidity which characterized his personality as sultan gradually gave way to self-confidence as king. But he never lost the reserve and dignity which characterized his dynasty's style. Through courteous manners and down-to-earth simplicity, when he so chose, he charmed his opponents into working for him.

Mohammed's legendary exile, during which time the Moroccan nation took form, gained enormous prestige for him, and he used this to full advantage. He combined in his person the religious authority of a sharif (descendant of the prophet Mohammed) and the martyrdom of an exile, and in his presence both modernists and traditionalists, Berbers and Arabs, found unity.

Although a theocratic king who was endowed with absolute authority, Mohammed exercised his powers more as an arbiter than as a despot, which fact added to his prestige. His character and his studies of Moroccan dynastic history aided him to maneuver his opponents rather than confront them. He was a master at balancing forces, speaking to all sides and giving everyone the impression that he heeded advice; but in the end he did what was best for the palace and his dynasty. By weakening the opponents to the throne, he strengthened royal institutions and became the indispensable symbol of national unity.

Without schooling in political science, Mohammed V nevertheless had a flair for politics. He was fully aware of the contradictory realities of his country, which had to undergo the profound transformation from a medieval kingdom to a modern nation-state. His aim throughout his last years was to help the traditional society adjust to this new, modern state. He died unexpectedly of heart failure after a minor operation on 26th February 1961. His son Hassan II succeeded him as king.

He succeeded in conciliating divided forces of Moroccan nationalism and helped to forge national unity around the throne.

“Everyone here is familiar with Mohammed V’s reply to Vichy (pro-Nazi) French officers and their German colleagues when they demanded Moroccan authorities hand over Jews in the country: ‘There are no Jews in Morocco, only Moroccans.’”