Kingdom of Spain
The Spanish autonomous region Catalonia voted against the incumbent three party coalition government. While the Socialists (PSC) lost nine and the former Communists/Greens (Iniciativa Verds-Esquerra ICV-EUiA) two seats, the Republican Left (Esquerra Republicana de Catalunya - ERC) was more than halved: from 21 seats it could retain only ten. Or in actual figures: In 2006 414,067 Catalonians had given their votes to the ERC, this time 218,046 Catalonians thought it to be a good idea to vote for the republican left.

The new government will be built by Covergència i Unió (CiU), a conservative and moderate separatist oriented party that had been in power for most of the time after Catalonia regained its autonomous status and became one of the autonomous Communities within Spain in 1980.

Victoria
Victoria went to the polls on Saturday and although not all votes are counted yet, it is most likely that the Australian Labor Party’s eleven years in government will come to an end. Premier John Brumby will be replaced by the Liberal Ted Baillieu. Mind you, this replacement is not the reason, why the RadicalRoyalist calls this electoral result a defeat for the republicans, though John Brumby loved to be called an "avowed republican". John Brumby’s record as a Premier of Victoria may have been appalling, when the transport system is at its worst since privatisation took place and the continuation of stupid and expensive, taxpayer strapping PPP (public private partnership) projects became a trademark of this state government, but since there is no guarantee that the incoming government of Liberal and National Party will perform any better, the main focus of this posting is on the fiercely republican Rob Hulls, Attorney General and “Labor’s attack-dog-in-chief, Brumby’s closest mate in caucus ... the man Brumby ensured became his Deputy Premier when others wanted the job after the abrupt departures of Steve Bracks and John Thwaites in mid-2007” (The Sunday Age on 28th November).

It was Hulls who accused opponents of his decision to replace the Queen with the Director of Public Prosecutions (DPP) from New Year's Day 2010 as "rabid Monarchists".

His possible replacement as Victoria’s Attorney General, Robert Clark MP, stated in a letter to the RadicalRoyalist, “that what the Attorney-General [Hulls] has announced is beyond his powers and usurping the role of judges. It is also in direct conflict with the rules made by judges about criminal court matters, which still provide for the use of The Queen’s name.”

It has to be seen, if the taking office of Mr. Clark will make a change to the better. The RadicalRoyalist will remind the new Attorney General of his words.

On a more reconciling note, it should be said that on the personal level, Mr. Brumby had an excellent relation with his Queen. After meeting the Queen of Australia in October 2009 he said: “I was so impressed by how informed she was about Victoria and about Australia. . .she was particularly interested in the recovery, how people were faring and the status of the temporary villages. 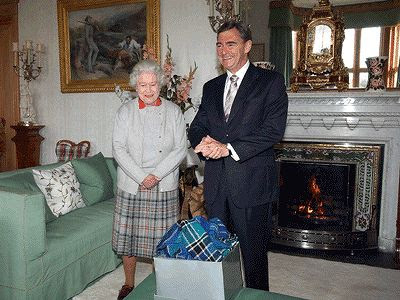 “She's a remarkable person. She's extraordinarily well informed and deeply concerned about what's happening in Victoria and Australia. That's what so impressed me and this is something she has personally felt and personally experienced.”
Posted by radical royalist at 5:36 am