Republicanism comes with a price tag

Did you ever leave a price tag on a present? Then you know the embarrassing moment, when the presented discovered how much how much he or she is worth for you.

For republicans nothing can be too embarrassing, when they think, it could damage the reputation of the Australian Monarchy. And it comes as no surprise that The Age was the republican mouthpiece to blast the present’s details into the world - all under the label of freedom of information (FOI): Bill for state gifts to Queen a princely $709:

“The details were revealed in documents, obtained by The Age under freedom of information, that show the planning that went into the regal audience at Balmoral Castle. The theme for the royal offerings was the vivid blue, white, green and pink of the Victorian tartan.

“The ties - which were produced for Princes Philip, Charles, William and Harry, with extras - were 70 to 75 per cent Australian merino wool with the maker boasting: 'From a fashion point - the use of the Windsor knot makes the ties sit beautifully with collar shirt.'

“Princess Anne received the woollen scarf and the Queen also received a photographic diary of the Black Saturday blazes ($645).”

How shocking, the presents for The Queen had to be bought - in Victoria and they were not "Made in China"! Should Mr. Brumby have knitted them himself at home? Or on his countless helicopter flights around the countryside?

How appalled must The Age have been, that “The Premier, an avowed Republican, said the visit was ‘quite an honour’ and was effusive in his praise for the Queen's interest in Victoria", as the same newspaper quoted Mr. Brumby on 6th October 2009 as he and his wife, Rosemary McKenzie, left Balmoral Castle. 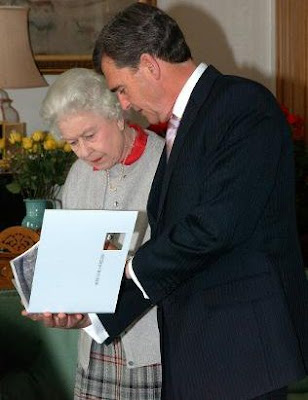 “I was so impressed by how informed she was about Victoria and about Australia ... she was particularly interested in the recovery, how people were faring and the status of the temporary villages.

“She's a remarkable person. She's extraordinarily well informed and deeply concerned about what's happening in Victoria and Australia. That's what so impressed me and this is something she has personally felt and personally experienced.”

Buckingham Palace had the decency not to go public with the presents the Brumby couple received in exchange. And Her Majesty will certainly not have left a price tag on the gifts. Style has no price.

And unlike the Labor Premier John Brumby the Queen of Australia also does not charge $5,000 for a seat at her dinner table.

Posted by radical royalist at 6:49 am