In an interview Julia Gillard revealed her republican attitude, which did not really come as a surprise. “I believe that this nation should be a republic. I also believe that this nation has got a deep affection for Queen Elizabeth. But I think the appropriate time for this nation to be a republic will be when we see the monarch change.” She then continued, she obviously wanted to see Queen Elizabeth live a long and happy life. “Having watched her mother, there's every chance that she will.”

What was highly speculative, because a politician’s wishful thinking cannot be forced onto the Australian people, even if this politician happens to be at present the country’s prime minister, became a fact in Rupert Murdoch’s Melbourne daily MX: 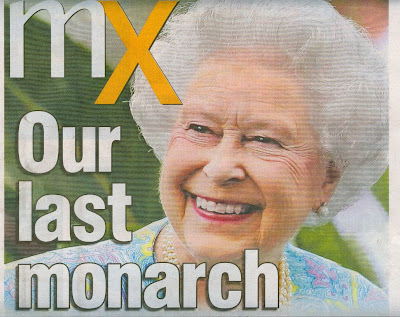 The headline does not contain a question mark, as if Julia Gillard’s idea were a fact. But still, when it comes to changing the Australian Constitution it is not Rupert Murdoch – and/or any politician – who make the decision, but the Australian people.

As the British Labour politician Harold Wilson, Baron Wilson of Rievaulx, KG, OBE, FRS, PC (11 March 1916 – 24 May 1995) said: “A week is a long time in politics.” When it comes to the Queen’s lifetime, it might last for another decade and more. Who can predict the political landscape in 2020? Not even a clairvoyant like Rupert Murdoch could tell the future.

Why should the Australians not show the same loyalty to King Charles as they showed it to the other Australian Monarchs? The preparation for a referendum takes years, in which the Australian people will get used to the next Monarch. They will shout in due course of time: "The Queen is dead! Long live the King!"
Posted by radical royalist at 7:46 am

Amazing is the quantity of paper spoiled with "news" like this. Mafia rubbish, that's all.

What worries me is that in a directly-elected republic, Murdoch is exactly the sort of person who would run for presidency, and would have any success... Millionaire business barons who have an extra $20 million+ spare to fund their presidential campaign.