"This week the happiness of two young royal children attracted more the attention of many Greeks than the unsolved conflict of Cyprus. Accompanied by the enthusiastic joy of his compatriots young King Constantine II led his 18 year old bride, Princess Anne-Marie of Denmark, to their wedding in Athens." This is how the German weekly DIE ZEIT began its report on the colourful celebrations in the Greek capital on 18th September 1964, to this day 45 years ago. 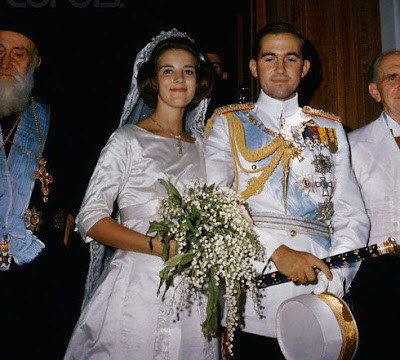 More still photos on this joyous day can be see on the website Greek Wedding.

The US magazine Time knew this about the Royal Wedding:
"Weddings are, so to speak, expensive propositions. In Athens, Finance Minister Constantine Mitsotakis announced that the marriage of Greece's King Constantine, 24, to Denmark's Princess Anne-Marie, 18, cost the treasury $303,000, including $183,300 spent on wedding gifts. However, an issue of 2,000,000 commemorative 30-drachma pieces will net a profit of $1,063,000, leaving the wily Greeks with $760,000 to play around with, or possibly use as a dowry for Crown Princess Irene." 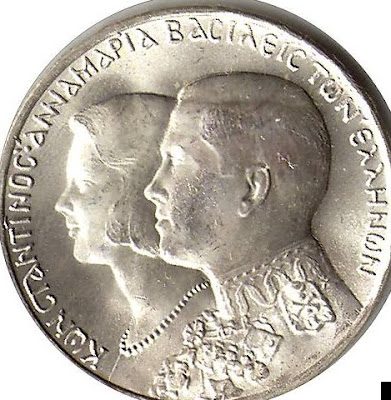 Posted by radical royalist at 12:11 am

What a beautiful video...what a glorious day it must have been!
How sad that the corrupt politicians and militarists of Greece threw this away!

Wish to live to see the day that His Majesty is restored to his rightful throne!

What a beautiful and glittering video....what a happy day for Their Majesties!

How sad it is that the corrupt politicians and militarists of Greece threw this away!

May God restore His Majesty to his rightful throne!

Beautiful video...though Mendelssohn's Wedding March is perhaps an odd choice for footage of a Greek Orthodox wedding. Both the Roman Catholic and Eastern Orthodox Churches (the latter generally not allowing musical instruments at all) frown on the use of Mendelssohn and Wagner due to their association with secular entertainment. Mendelssohn and Wagner's wedding marches are "traditional" only for Protestant weddings...interestingly enough, a tradition which was popularised by the marriage of King Constantine's great-grandparents (future) Friedrich III of Germany and Victoria of Great Britain in 1858!

May God restore him to the throne.God is with us and constantinople is GREEK

God Will restore our Orthodox monarch. With God's Will we Will take Black Asus minor cyprus north epirus and of course our capital Constantinopole

God Will restore our Orthodox monarch. With God's Will our King Will take Back our lost terittories in Cyprus, Asia minor, north epirus and pontus

God save the King