Paola Totaro, The Age’s Europe correspondent, was the lead story of extra, the paper’s quarterly newsletter, published last Saturday. Since 2008 she enjoys the “job from heaven” and “her reporting successes soon included … Prince Charles (the Man Who Would be, er, King …)”. This is probably the most positive reference the heir to the throne could get in Fairfax Media.

The journalist’s portrait has more to tell about her encounter with the Prince of Wales: “It was via the [Foreign Press Associaten in London] that she met Prince Charles, speaking at an award night. This confirmed what Totaro’s research had shown – even while many lampooned him, he’s been warning about climate change for 20 years.”

Wow, what extraordinary piece of investigative journalism do we get here! The Age’s correspondent found out what everybody, who paid just a little respect to Prince Charles, could know. But the Fairfax journalists were too busy “lampooning him”. 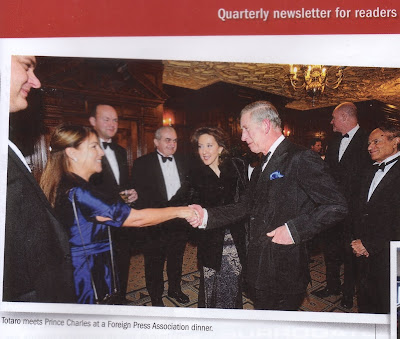 Posted by radical royalist at 6:40 am

Email ThisBlogThis!Share to TwitterShare to FacebookShare to Pinterest
Labels: Fairfax, King of Australia, Prince Charles, Prince of Wales, The Age