The Age changes the Royal crest

The Age has never made a secret of its republican bias: “… this newspaper has long advocated that Australia should become a republic." (The Age, 15th April 2008).

This 1st April 2009 Paul Ramadge, the editor of The Age, will present the paper’s new masthead. Leaked documents show the changes. “Since our republican attitude was not reflected by the royal coat of arms in the centre of our masthead, we had to remove the crown and replace it with a republican symbol.”

The Age art director Bill Farr is well aware of the ramifications. “The masthead has to convey the feeling of the paper, reflects it content, underline its worthiness,” he says in “extra, the quarterly newsletter for readers of The Age", March 2009 (not available on-line). The current version, developed by Farr and design specialists de Luxe & Associates, had been “working so well after seven years”, but needed a revamp to reflect the newspaper's republican policies.

The crest, the potent symbol splitting the royal motto “Dieu et mon Droit” first appeared on The Age's front page in 1861, featuring a coat of arms, the lion of England and the unicorn of Scotland. They will remain for the time being. “We toyed with the idea of developing a uniquely Australian crest, but it was fraught with indecision,” says Farr. “There’s also been a push to get rid of the crest entirely. A republican push, which is not a surprise. However, while the crest dates you in one way, in another it stamps your authority.”

Therefore The Age opted for a compromise: The Jacobin hat - also known as Phrygian cap - was deemed suitable to make the editorial strategy of The Age clear. In future it will look like this:

During the French revolution, the first Phrygian caps appeared on the heads of the French a few months after the storming of the Bastille. They were made of red cloth. To wear the Phrygian cap was indeed a way of advertising one's patriotism.

“The Age’s masthead underwent changes before”, Paul Ramadage wrote in an internal memo. 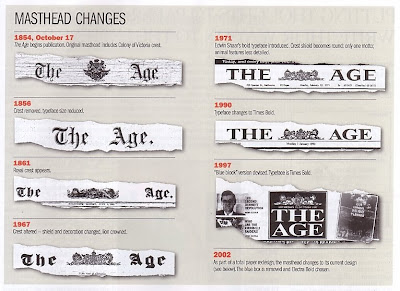 He did not face any resistance neither from the editorial staff nor from Fairfax media, The Age’s owner. However, John B. Fairfax, whose 10.6 percent stake in the company ranks second, remarked: “Almost invariably there are at least two sides to a story, so the task for the journalists is to seek and determine the truth. The publisher must be able to publish knowing the content to be correct and to be the truth.”

New PR-slogan as well
Ignoring Mr. Fairfax's remarks another change is due to be announced: From on 1st April onwards The Age will change its PR-slogan. Posters around Melbourne will no longer proclaim: “If it matters to you, it’s in The Age”, but more accurately: “If it matters to us, it’s in The Age.” The new slogan better reflects The Age’s daily content and will no longer confuse readers who used to miss important news items that were not covered by The Age.
Posted by radical royalist at 12:07 am

I sincerely hope that this is just an April Fool's Day jape. Although The Age having the symbol of Jacobinage on their masthead would be appropriate.

Yes, this post was an April Fool's Day hoax, however, most quotations were real, especially the ones from “extra, the quarterly newsletter for readers of The Age", March 2009. “There’s also been a push to get rid of the crest entirely. A republican push, which is not a surprise."

The Age deserves the Phrygian cap.

Anyway, they can not simply change the official crest, I presume. If so, they could be prosecuted, just like if they would burn the australian flag in public.